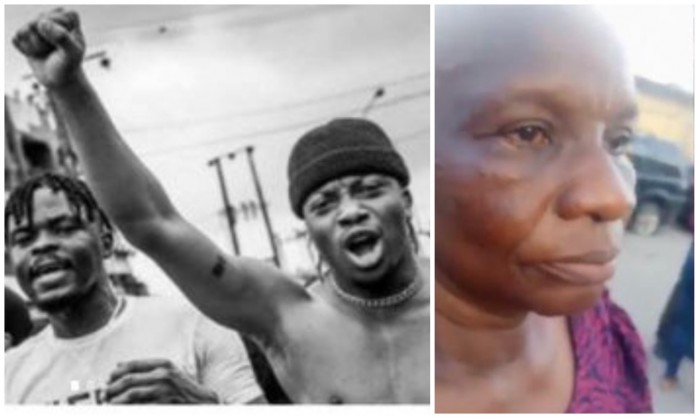 Oxlade’s manager, Oja Bee’s 68-year-old mother, Mrs Durojaiye Olaleye, who was slapped by a Police officer has been visited by the Nigerian police force.

Kemi Filani News recalls that, Mrs Durojaiye, was on Monday slapped by a police officer after her son was detained during a peaceful protest at Hogan Bassey Divison.

The elderly woman narrated to newsman on Tuesday, that on getting to the station with her daughter Tolu, they met some of the officers and they exchanged greetings, only for one of the officer to approach them and started slapping her for no reason.

Read her words below;

“It is our duty as a family to go to a police station and ask about our people in their custody. We need to know whether they will release them on bail, so that we can arrange for a lawyer or that they are taking them to court,

They must give us details of what to do. If they are arraigning them, they need to tell us the court so that we will meet them at the court. That was the reason why we went there. I went them with two of my sisters that our people have been arrested since 1 p.m. and this was to 6 p.m.

I was wondering that where is the entrance to this police station then I saw a small gate with a small table there and I said that must be where we’re supposed to ask and they will tell us what to do.

As we were about going to that place, we just heard a commanding tone behind us that “all of you, get out of this place.” As I looked back to check what was happening, I heard the slap ‘gboah’

“We had not even mentioned anything before he slapped me. What did I do wrong? What is it? He slapped me again.

However, her daughter Tolu has taken via her Twitter handle revealed that the Police sent some delegates to their house to atone to her mother and her son, Oja Bee.

READ
Georgina Onuoha reacts to being called out for not supporting US-based Nigerian doctor
SOURCE: