The Lagos State judicial panel of inquiry into brutality and high handedness by the now-disbanded Special Anti-Robbery Squad (SARS) unit of the...
Read more
Home Business “I will gift my N1million win to my only parent, my mother”...
Facebook
Twitter
Pinterest
WhatsApp 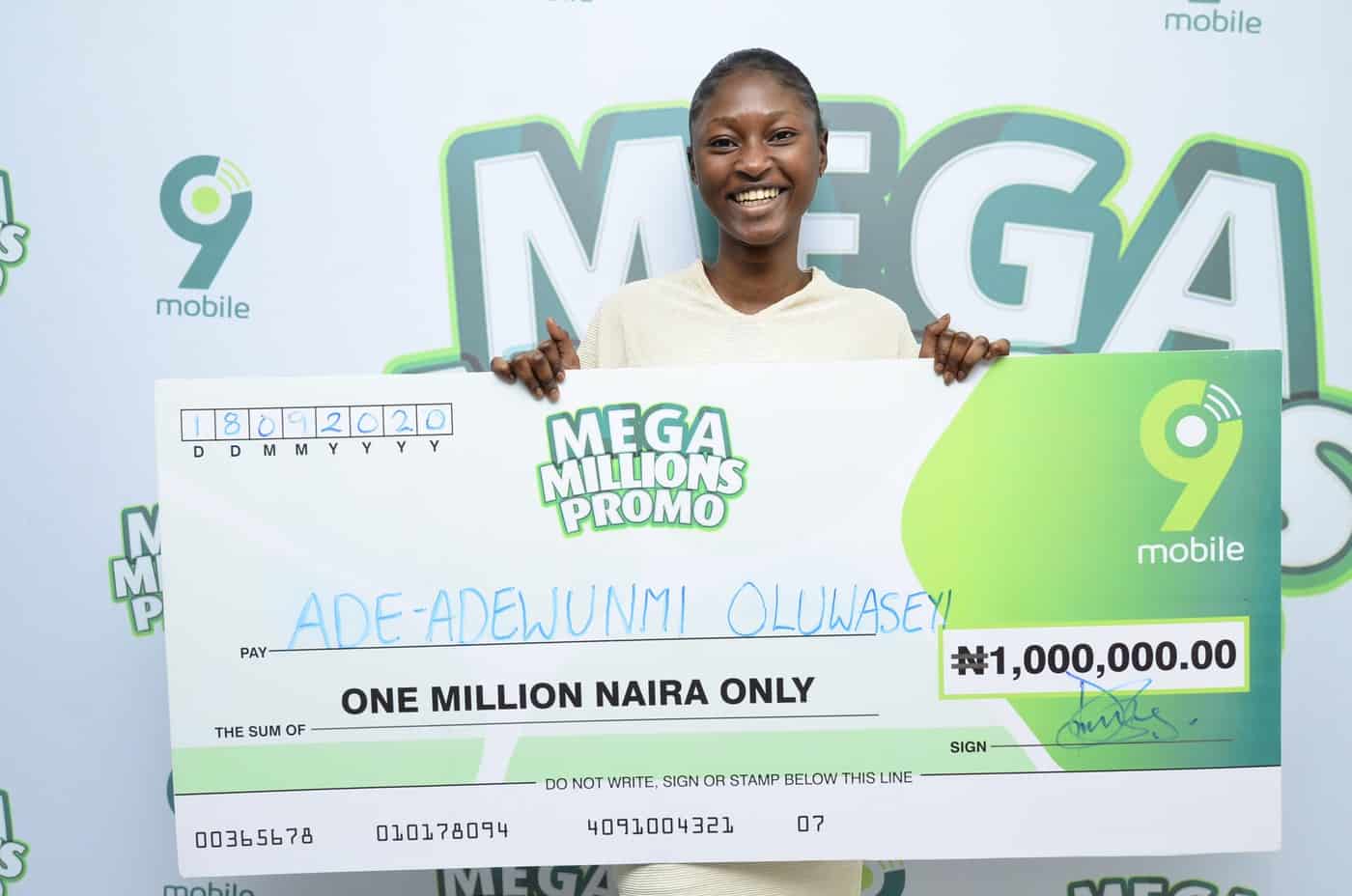 As more winners continue to emerge across the country in the ongoing Mega Millions Promo courtesy of Nigeria’s most customer-focused telecommunication company, Ade Adewunmi Oluwaseyi, a sophomore at the Moshood Abiola Polytechnic who claimed her N1million at the 9mobile Experience Centre along Allen Avenue, Lagos, has decided on what many are describing as a most commendable gesture.

According to Oluwaseyi, she intends to give the whole cash prize to her mother who is a single parent and struggling to take care of her two children. The 9mobileMega Millions promo is designed to reward 90 lucky customers with N1 million daily. Also, customers will also win smartphones every hour for 90 days and a grand prize of N10 million at the grand finale.

Just like other winners in the Mega Millions promo, Oluwaseyi had thought that the promo was a hoax.  “At first, I thought that it was a scam, then I got a call from a 9mobilecustomer service representative that I should come and claim my money.

I never believed it until I got here only to see that it is real. My mummy is a single parent and we are struggling at the moment. So, I will give the money to my mother so that she can use it to cater for my elder sister and me. For those who are still doubt this promo, I want them to know and believe that it is real. I want to appreciate 9mobile for this Mega Millions Promo”, an elated Oluwaseyi said.

Speaking after being presented with his smart phone, Mr. Emmanuel Ochia who hails from Benue state said that he didn’t know that the 9mobile Mega Millions promo was on until he received a text message on the 5th of September, 2020 that he had won a smartphone from 9mobile.

“I didn’t take it seriously until I was called five different times. I was excited when I was informed that I have won a smartphone. For those that doubt this promo, I want to tell them that it is not a scam. When they told me that I won, I went on line to verify and I saw proofs online of customers’ winnings. That was when I believed that it is real. They should keep recharging and could be lucky winners. I will continue to recharge until I win the grand prize of 10million.”

Mr. Francis stated that he thought that the Mega Millions promo sounded too cool to be true. “Sometimes I just ignore the text messages but it was so shocking when I was called that I had won. I just discovered that one could be a millionaire by simply recharging a 9mobile line. I am still in shock!

Having retrieved his line barely 3 months ago, Mr Francis paid glowing tribute to 9mobile for providing consistent reliable and efficient network for its numerous customers.

Hear him; “I have always had this very strong belief that 9mobile has a very efficient and reliable network. Ever since I have been using 9mobile, the network has been great. I don’t experience network issues while going about my work. That is the reason why I opted to stay with 9mobile when I misplaced my old phone because 9mobile provides dependable network.”

Describing the modalities of the promo, 9mobile’s Acting Director, Marketing, ‘Layi Onafowokan, said the Mega Millions Promo adopts a recharge and win mechanism. “To participate, customers can simply recharge their lines with N200 or more to win a smartphone every hour or top-up N1000 and above to win the N1million daily prize.

A cumulative recharge of N10, 000 monthly, over the 90 days duration of the promo qualifies customers for a chance to win the N10, 000,000 grand prize,” Onafowokan explained. “Participants can increase their chances of winning with rapid and frequent recharges. New customers will also get up to 100% data bonus for 12 months with free 1GB and N500 airtime,” he Concluded.