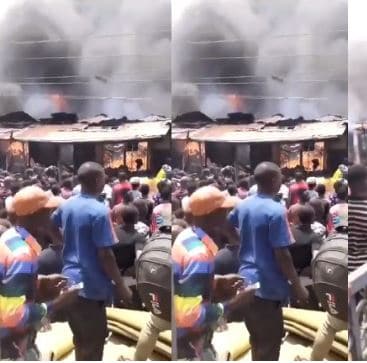 Properties worth millions of Naira have been lost after fire gutted a section of the popular foam market in Ladipo Mushin, area of Lagos state today August 1.

According to reports, the incident was said to had happened around 1pm at 16, Ladipo Street in Mushin, said Spokesperson for the Lagos State Emergency Management Agency, Nosa Okunbor.

Although, no casualty was recorded at the filing of this report but search and rescue operation is ongoing.

In a subsequent statement, the spokesperson stated, “The fire, which cause is yet to be ascertained, has now been brought under control and stopped from further escalating to adjoining buildings, with no loss of life nor injuries recorded so far at the scene of the incident.”