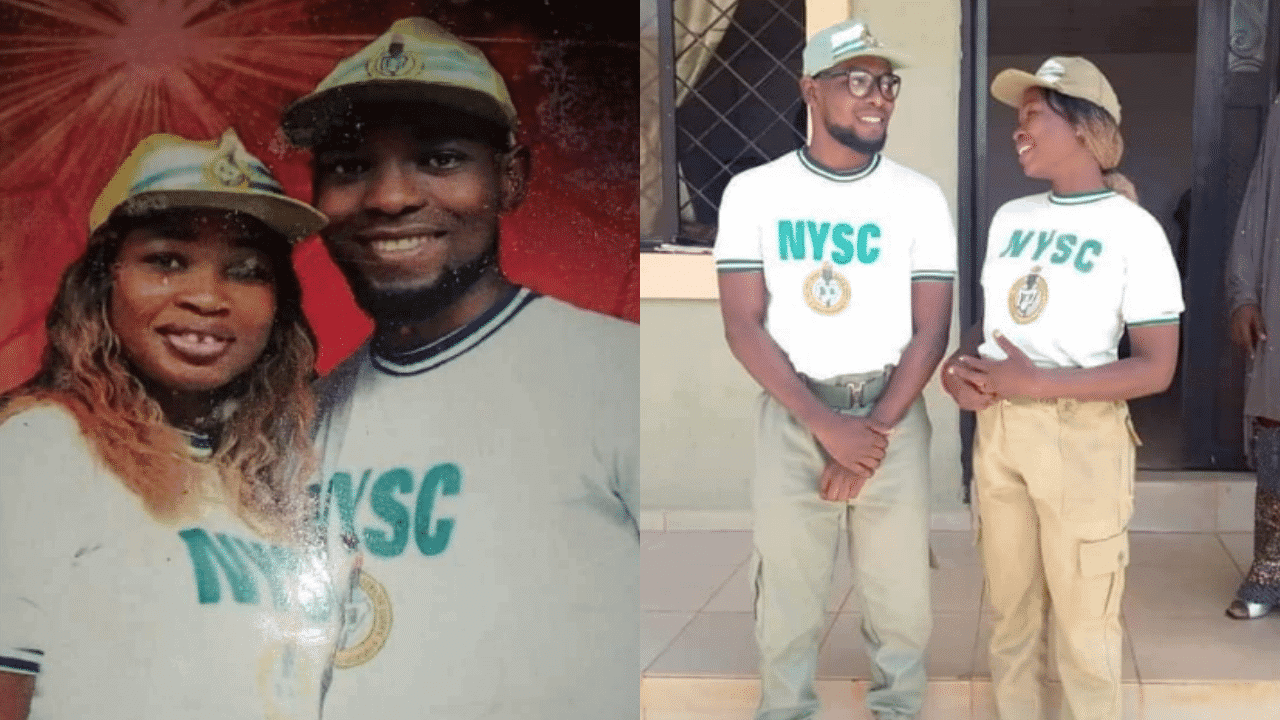 Love is indeed a beautiful thing. Two Corps members who met in Plateau state are set to walk down the aisle together.

They met during their mandatory one year youth service and yes, they’ll say “I do” this Saturday, May 30.

According to a statement from NYSC, Felicia Haruna from Kaduna state and Mark Makafan from Kogi state, met at the Mangu Orientation Camp in Plateau state in 2019, fell in love, and started a relationship that is leading to marriage. They will be wedding two days after they pass out from service this Thursday, May 28.

Read the statement from NYSC below…

They were both deployed to Plateau State for the one year mandatory service to the nation having obeyed the clarion call and reported to the NYSC Permanent Orientation Camp, Mangu, Mangu LGA, for the 2019 Batch “B” service year.

Being members of seven (7) Platoon in camp, the duo from different backgrounds, yet, with many similarities, the relationship which was borne at Mangu camp has today culminated into marriage and as the service year draws to a close, they have unanimously declared, “I DO”.

Extending the wedding invitation to the State Coordinator, NYSC Plateau, Caroline Embu, the Corps Members expressed great joy to have met during the service year and united together in love to a life time adventure.

They appreciated the NYSC Scheme for the enabling environment it created through the deployment of graduate youths to states other than their states of origin to promote unity irrespective of origin, religion, class, tribe and cultural differences which is also bridging gaps and building long lasting relationships.

In her response, NYSC Plateau State Coordinator Caroline Embu commended the intending couple for keeping faith with their heart desire and for the promotion of national integration and unity through marriage from two different states of origin and geopolitical zones. which she further described is in line with the mission statement of the NYSC Scheme.

Bobrisky says he doesn’t sleep around

She prayed for the intending couple and blessed their marriage with long life, prosperity and unending joy. She also advised all Corps Members to use the service year as a stepping stone to attain greater heights by being focused and having unity of purpose exhibited by Corps Members Felicia and Mark.

Their wedding ceremony is scheduled to hold at St Peter Claver Catholic Church Cathedral Kafanchan, Kaduna State on Saturday, May 30, 2020 by 10:00 am, two days after their Passing-Out from National Service.”

Jude Okoye did his best to help Cynthia Morgan, May D – J Martins

Singer J Martins has reacted to the social media call out of Jude Okoye by singers Cynthia Morgan and May D.

Both singers accused Jude Okoye who is the CEO of Northside Records of giving them an awful record contract.

In reaction, J Martins who was an insider during the whole process stated that Jude Okoye did his best for both singers.

He wrote on Instagram: "I made a promise to myself that I will never discuss anything that has to do with my brothers the Okoye's family or ( Psquare ) on social media platforms not minding pressures from left right and centre. Jude has always been the elder brother to all of us while he was the manager as well too.

This is coming after the dance hall singer, made a U-Turn on her statement, that Jude Okoye was the cause of the downfall.

He took to micro blogging platform, Twitter to render his apology in a series of tweets after he was called out by Nigerians.

"I have been in the Nigerian entertainment industry since 2004 and if there is anything the past couple of days have taught me, it is the importance of taking all sides of the story into consideration before forming an opinion"

"On the Cynthia Morgan story, I have taken notes...

Controversial OAP, Toke Makinwa has said that she can't wait to "fall hopelessly and madly" in love again.

The OAP was formerly married to Maje Ayide, a marriage which ended in a messy divorce.

Years after living life as a single lady, Toke Makinwa says she hopes she will get loved in return as she gives love a second chance.

She shared on Instastories: "No matter what life has thrown at me, I am still a ”Hopeless Romantic”.

"I cannot wait to fall hopelessly and madly in love,

"I love love, hopefully it loves me back.. Someday".

This comes a week after a report stated that Toke Makinwa and Medical...