Controversial Nigerian cross dresser, Idris Okuneye, popularly know as Bobrisky has reacted after a man allegedly asked for his hand in marriage!

The Yoruba born alleged gay man took to his verified Instagram page to share screenshots of the marriage proposal he allegedly got from the man he tagged a “hungry looking” fellow.

The the screenshots shared, the man sent Bobrisky a DM professing his undying love for him.

Bobrisky however slammed the man for having the guts to propose to him. Bobrisky said he doesn’t do broke guys and advised him to go to the village and pick a wife.

Speaking further, Bobrisky said he is not ready to suffer with any man in the name of marriage, so any guy seeking his hand in marriage should be wealthy enough.

What Nigerian celebrities are saying about Mompha's arrest

Kemi Filani News recalls that on 13 January 2014, The then president of Nigeria, Goodluck Jonathan signed into law the Same-Sex Marriage Prohibition Act, which parliament passed in May 2013.

The law follows a similar one passed in Uganda in December 2013, which imposes life imprisonment for some types of homosexual acts.

Regina Daniels accused of trying to abort her pregnancy

Teenage actress turned billionaire's wife, Regina Daniels have been accused of trying to abort her pregnancy.

The Delta born script interpreter has always been on the news since her marriage to billionaire politician, Ned Nwoko.

Coming after Kemi Filani News exclusively confirmed her pregnancy, a Nigerian man named Chris Uche has taken to Facebook to accuse her of trying to "kill" the baby.

According to Chris, Regina just married Ned Nwoko for his money and she is doing everything possible to abort the child she is carrying, because she doesn’t want to raise kids for him.

Chris‘ allegations came after he saw some photos of Regina Daniels working out at the gym.

BBNaija Khafi, reacts to being tagged a gossip, defends her friendship with Tacha |Video

Following the accusation of being tagged as a gossip, BBNaija ex housemate, Khafi has decided to react by releasing a video of herself clearing the air. According to Khafi, her friendship with controversial ex housemate, Tacha is nobody's business.

''If I’m going to be persecuted for being Tacha’s friend, then so be it'' Khafi said.

Recall that few hours ago Tacha,came for those calling her friend, Khafi, a gossip. In a video she shared on her Instagram story, the Port Harcourt first daughter literally dragged the life out of Kafi’s haters. Tacha called them out for being guilty of what they do. 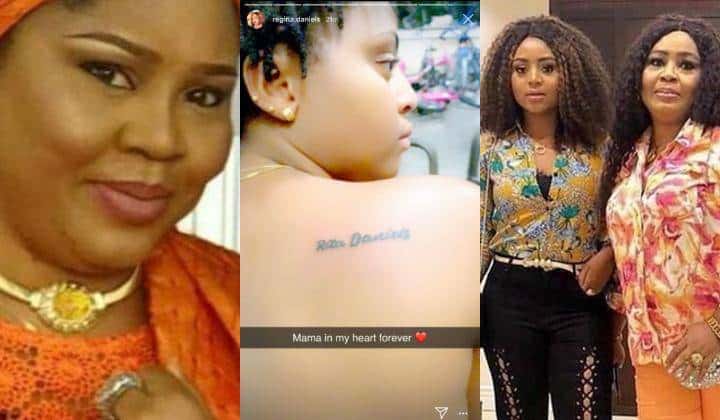 Nollywood actress, Regina Daniels has shared a photo of how her mother reacted to the tattoo of her name she had on her back.

Yesterday Regina Daniels took to her Instagram story to share a photo of her back only to show off the tattoo and on it was an inscription of 'Rita Daniels.'

She simply captioned it with... “Mama in my heart forever ❤️”

Reacting to it, Rita Daniels admitted that the act made her cry!

The she later on said, she will forever stand by her by the grace of God and went on to say to her...