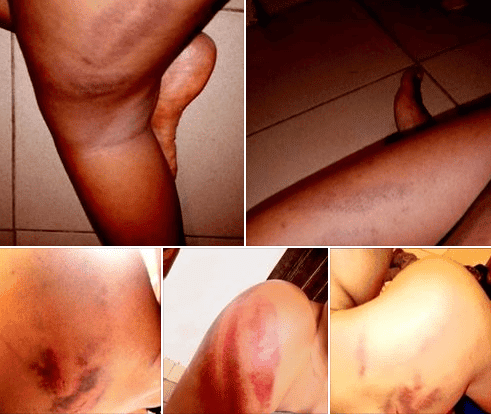 The commissioner for water resources in Kogi state, Abdulmumin Danga, has been accused of harassing a lady who was stripped naked and flogged by his thugs.

“The commissioner for water resources in Kogi state, Abdulmumin Danga stripped Elizabeth naked. With his thugs, they flogged her mercilessly, made a nude video of her apologizing to them under duress and threatened to upload it on social media

The victim, Elizabeth, has a 3 year old son who the Commissioner made sure was present at the scene of this abusive and humiliating act. We can only imagine the trauma both Elizabeth and her son is going through

She was flogged because of a post she made on Facebook advising the wicked commissioner to take care of his household. To every human right defender, I call on you to join me and seek for justice for Elizabeth and her son

He forcefully sent in thugs that kidnapped her and her son in Okene, took her to Lokoja; molested and maltreated her and held her captive for a day, before her release after a nude video apology

Currently, Elizabeth’s life, that of her son and parents are under threat. The commissioner has sent thugs who know her whereabouts to forcefully kidnap her again back to his house in Lokoja. His thugs have called my friend severally to threaten us #JusticeforElizabeth

We call on @PoliceNG and all human rights individuals and organizations to help protect Elizabeth and those threatened by the Commissioner’s thugs if they report or expose this case. We must stand to defend each and everyone us against people like Danga #JusticeforElizabeth

We MUST NOT allow this injustice by this misogynistic and wicked commissioner and his thugs continue. We call for the immediate sack and prosecution of Abdulmumin Danga by Governor Yahaya Bello #JusticeforElizabeth #ProsecuteDanga

We must rally our voices behind Elizabeth and her children, and use Abdulmumin Danga as a scape goat to anyone who thinks they can use their power to oppress and punish vulnerable citizens. Imagine the level of impunity by this Commissioner

Elizabeth and her children need all the help they can get – lawyers, activists, human rights organizations etc. to help deliver justice. She must not feel humiliated, it is the Commissioner who should be shamed and prosecuted”.

COVID-19: Soldier tries to shoot man who slapped him for breaking lockdown order (Video)
See the unbelievable punishment given to a thief in Warri (Video)
To Top