Adegboye Olatunji, the SUG president of Ilaro Polytechnic, has stated that he is not a cult member but was charmed by cultists and taken to a bush where police rounded them up.

Kemifilani reported that Adegboye was arrested alongside one Olanrewaju Taiwo during the initiation of new members into the black axe secret cult.

“I was going to the church around 7am on Sunday. I was going to a church in llaro. My rector also goes to that church and he hates anything cultism.”

Epressing disappointment over the way the school authority treated him, Adegboye said, “They didn’t fight for me because they didn’t make the proper findings.”

He added: “I don’t know anything about this; I’m not a member. I didn’t confess anything. They searched my room; they didn’t find  anything.”

Kobe Bryant and Gigi laid to rest in private funeral, public funeral to hold on February 24 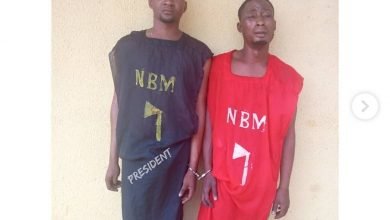