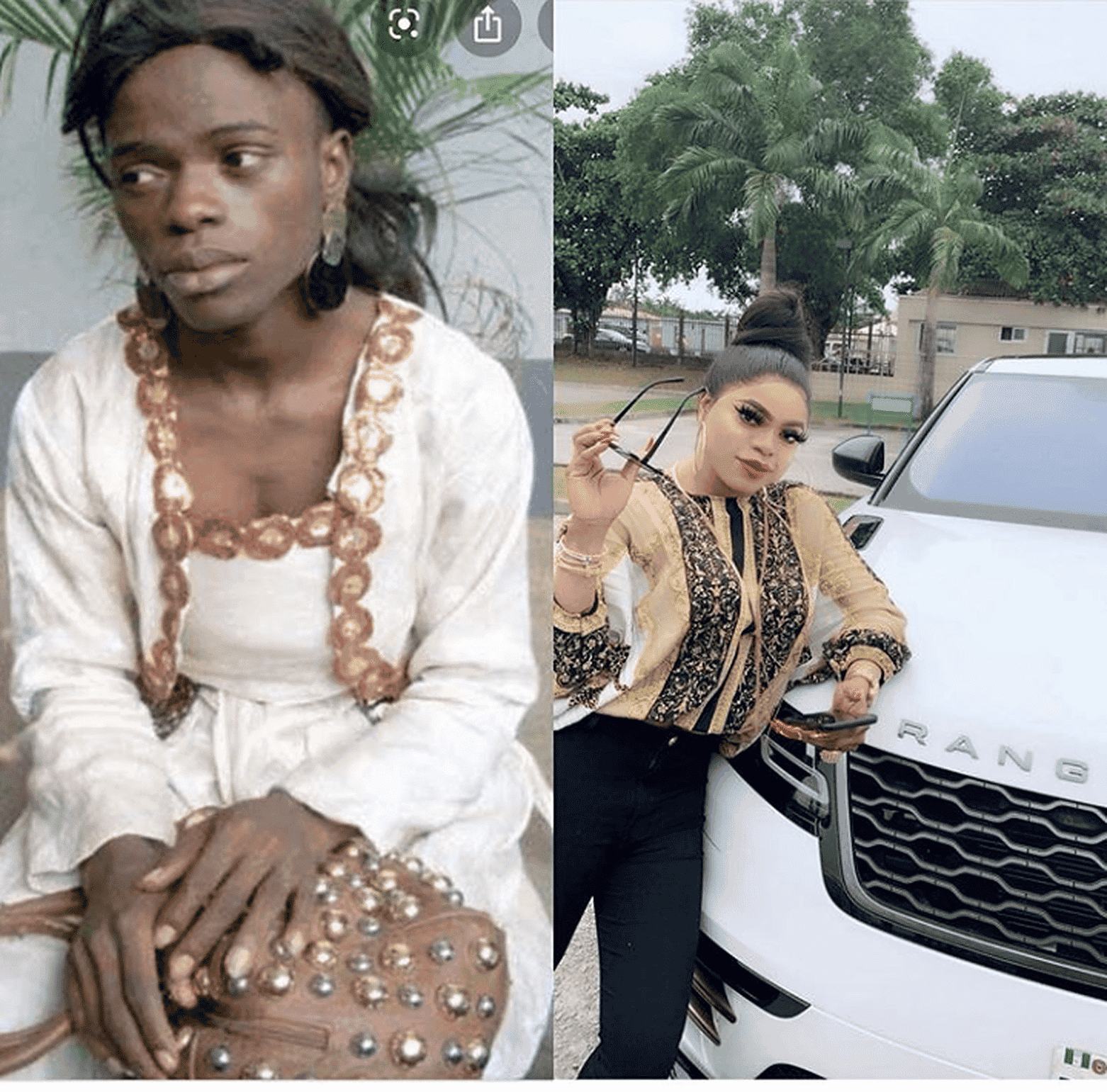 Popular and quite controversial Nigerian cross-dresser Bobrisky has intentionally tensioned his followers on Instagram.

The bleaching cream seller shared his long time throw back photo and listed his achievements so far..

He posted the photo above and captioned it; ” When bob was nobody VS when she is now a fucking MILLIONAIRE 💵. Let me brag small on my achievements……
Own a house in lekki
Drive a 2019 Range Rover
Drive a Benz cla amg
Drive a BENTLEY
many investors at hand now
Own a cosmetic brand
Lastly she is now FAMOUS”
This has also garnered reactions from fans who kept asking him to teach them how he rose from grass to grace.

Kemi Filani News would be recall that yesterday, Bobrisky, states that living a fake life comes with having a certain amount of money before this can be achieved.

Reacting to claims that blogger Gistlover investigated a business, ‘Omashola’s Place’ that Bob has been promoting, the popular cross-dresser captioned her post;”And y do all dis bloggers think they can bring people down with their rubbish talk… So gistlover had the time to investigate @omosholas_place but failed to put all those energies together to better his/her life ? Rather than to be a WACKED blogger 😂😂😂😂😂😂. Live your own fake life too now. Is anybody holding your father hand? ”

Bobrisky begins search for his valentine partner, reveals all the plans he has for him

OAP Gbemi has condemned the practice by hospitals who request you make a deposit before you are treated irrespective of whether you are in pains or not.

According to the OAP who recently cried out about wedding vendors, she found it awkward that while she was in pain and bleeding, the hospital she rushed to for treatment requested for deposit before they could treat her.

She tweeted: "You go to a hospital in pain and while receiving treatment - they bring the bill for registration . Damn! Can you chill ? They want to admit you and ask you to drop 150k deposit . Kilode ???

She added: "I remember being admitted at a hospital last year, while they were setting the drip (I.V) , they brought the...

It is indeed a double celebration for Nollywood actress, Eve Esin who recently got engaged and now celebrating her new house.

The bride to be, took to Instagram to show off a new house she built as she dedicated it to her late mother, who described as her first love.

Eve Esin disclosed that she built the house to give her mother the honor she desired.
The light skinned actress added that the “deal” is to continue making her mother proud.

She wrote: “To God be all the glory. I finally gave you that honor I desired to give you mum. May...

Actress Juliet Ibrahim has slammed all those telling actors to go find another job to do.

They were criticized by some movie practitioners who advised them to go get another job and stop dwelling on acting alone.

“So you’re saying an actor should stop acting if that’s the only job an actor knows best???! What if u were asked to stop tailoring and find another day job how would you feel my brother? Acting is a full-time job that pays people’s bills all over the world. An actor shouldn’t have to find another job if the...

How I was shocked while in pain and bleeding at a hospital – OAP Gbemi
After 27 yrs of marriage and 2 kids, Phillip Schofield ‘comes out of the closet’ (Photo)
To Top