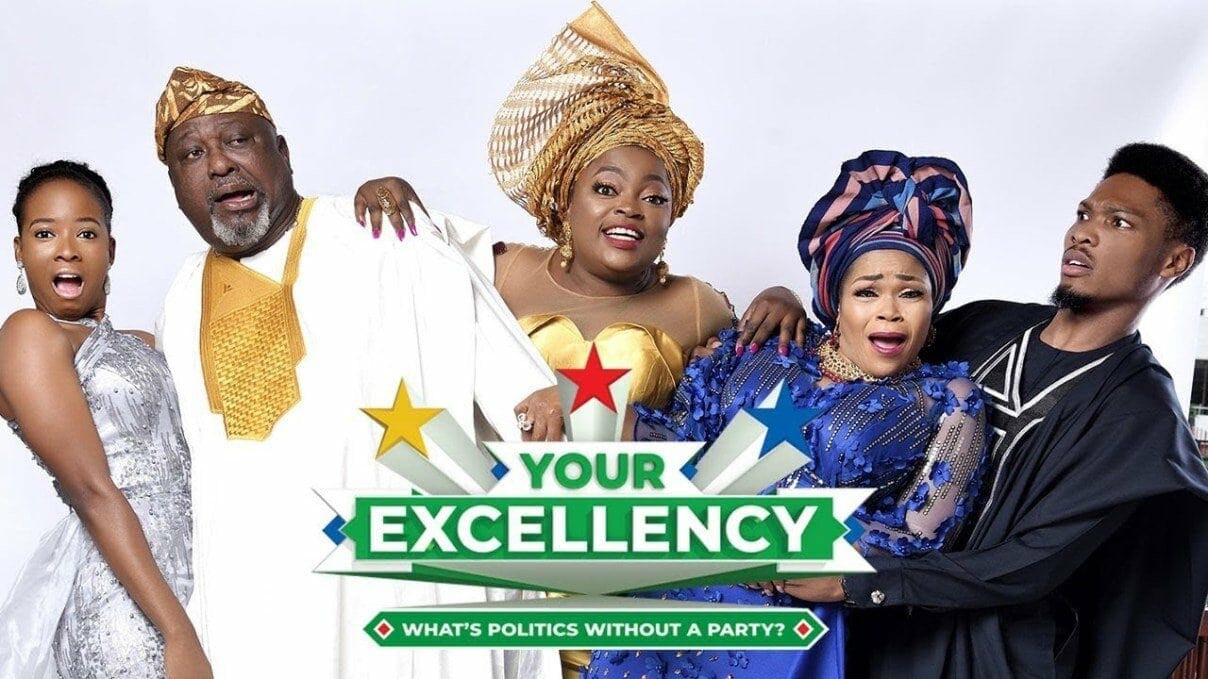 Kemi Filani News finally got to watch EbonyLife Films’ 2019 December special, Your Excellency last night and were we impressed?

Your Excellency which was directed by Funke Akindele, is a two-hour political satire comedy that tells the story of a bumbling, billionaire businessman, failed presidential candidate and Donald Trump wannabe, Lekan Ajadi (Akin Lewis) who becomes a credible contender when his dance moves and gaffes ignite social media.

To be honest, Your Excellency had quite a number of impressive hilarious scenes that shook several tables in the Nigerian political/social media scene…from the dancing senator, Ademola Adeleke to Rochas Okorocha who created a ministry of happiness, to Donald Trump, to bloggers and of course, fake slay queens!

We loved its picture quality, sound, and the graphic editing…well, we didn’t expect less from Ebony Life films.

We also loved the chemistry between Kemi (Funke Akindele) and Ajadi (Akin Lewis), they were so sweet to watch and they especially Akin Lewis OWNED the story! The best scenes in the movie have Akin and Funke in them….also the first wife, Shaffy Bello was another amazing character we loved.

It also had some memorable catchphrases like “If I can successfully manage two wives, then I’m most capable to rule this Nation”….“I am doing a white fast, where I take only white things like pounded yam, white soup…”

Your Excellency doesn’t, however, come without its flaws.

It had unnecessary characters, scenes and subplots, e.g the useless scene with Falz and Beverly Osu in a private jet….There is Emma Oh My God with his dumb pastor performance that is supposed to be funny… Kemi Lala Akindoju, Ini Dima-Okojie and many more, that will get you wondering their relevance to the storyline.

Also, if you like your Nollywood full of slapstick comedy and belly laughs, this may not be the ideal film, as this satire is a little more sophisticated. There were forced jokes, bad delivery, and very basic contents at times.

So, should you watch or not, the ball is in your court!

Amidst speculations that Davido has been cheating on his fiancee and third baby mama, Chioma, the once upon a time love birds have also taken their messy fight to social media.

Several reports are confirming Chioma who is also known as Mama Ifeanyi has unfollowed her baby daddy on Instagram.

Merry Men 2: The one time AY Makun made us proud
Sugar Rush: We expected more from Adesua Etomi, Banky W and Toke Makinwa
To Top