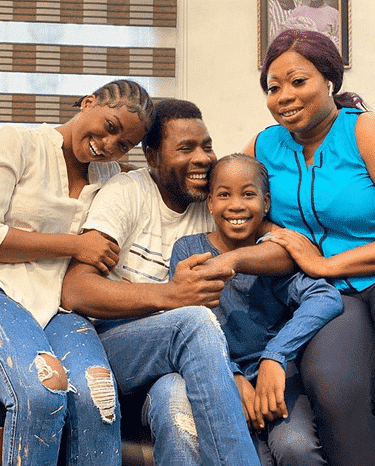 Although he didn’t say more, there are speculations that the photo comprises of a babymama and his daughters.

Ibrahim Chatta’s first marriage with Olayinka Solomon ended in divorce and mutual recrimination with Solomon accusing him of wife battery, a charge he denied.

Also Ibrahim used to be married to a Senator’s daughter, Salamat, but they parted ways on messy terms.

His second one to Salamatu, daughter of a former governor of Kwara State, and currently a senator, Shaaba Lafiagi, which was elaborately consummated in 2012 was also ill-fated with unconfirmed reports claiming that the cause of the break-up was that groom’s family felt angst about the poor living condition of the actor in Ikotun area of Lagos State.

READ
After unfollowing everyone including Chioma, Davido caught following this beautiful lady

“When I married Salamat, the daughter of a senator, there was no trust in the union . I begged and did everything to make the marriage work because I feared what the fans would think about me. I didn’t want the public to think I could not keep a happy home or see me in a bad light because I know I am a role model.

“But she said she had stopped loving me since 2012 when we did our Nikkah. According to her, she was only pretending all the while. Even though my mind was no longer in the relationship too, I still wanted her and was willing to put things in order.

READ
Actress, Ireti Doyle has a message for people who constantly curse Nigeria as a country

“When couples fight, I don’t know why people always put the blame on men. If you are an entertainer, it becomes worse as there is a general insinuation that entertainers are promiscuous and irresponsible. heard different stories when Salamat left me.” Ibrahim Chatta had revealed.

He however got married a third time to his current wife, Olaide in 2016.

Kemi Filani News reports that while marking his wedding anniversary in October, 2019, Ibrahim Chatta in his tribute to Olaide Aisha, with whom he has a son, wrote “The day I said I do, was d day I made d decision to spend d rest of my life with u. I will LOVE YOU till my dieing days. Happy wedding anniversary Mrs Chatta”