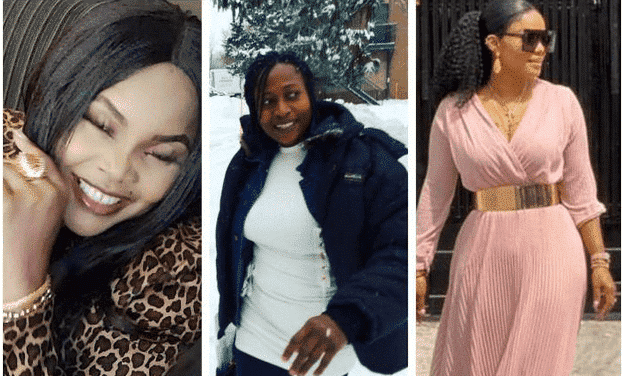 Lase, the first son of late actress Aisha Abimbola, has spoken out and refuted the claims that actress Lola Alao has been maltreating them.

This he revealed in a live video with actress Iyabo Ojo, monitored by Kemi Filani News.

“…I am fine ma…Mummy bought me a phone…ma, can I talk to all the people talking bad about my mummy cos it is not true….”

Iyabo Ojo cuts in “No, you don’t need to, you are too young to join in this live video, if I had known you were the one, I wouldn’t have picked….you owe no one any explanations….how are you? Are you happy? Is your sister happy?”

“Yes ma, I am happy…my sister is happy, we are happy, see her playing there” the young boy responds.

Also defending her friend, Iyabo Ojo said “‘When I was in Canada, I spent 10days, I saw how Aunty Lola took care of him. The boy even promised to buy her foster mum ‘Aunt Lola’ a house in future’.

Imagine if he’s been maltreated would he has said such? There was a time she left everything she was doing to attend to her daughter for three months after undergoing a brain surgery. How many of you can do that for a child that is not yours?…she doesn’t even beat them” Iyabo Ojo stated.

Responding to accusations that she makes them trek to the school Lola Alao who later joined in the live chat said “umgbo sweetheart, how many minutes is your school from the house ..do you allow me take me to school….“

Lase responds “2 minutes…..No i don’t, I prefer walking with my friends”

Then Lola places a curse in yoruba saying “If indeed i maltreat those children, let it not be well with me”

Kemi Filani New recalls that Lola Alao took custody of Lase and his sister after their mum, actress Aisha Abimbola died of cancer in Canada in 2018.

A Nigerian soldier has stated that it is forbidden for a woman to check her husband's phone.

Bilyaminu Ladan Mada who shared on Facebook stated that while women are prohibited from checking their husband's phone, a man has the right to check his wife's phone.