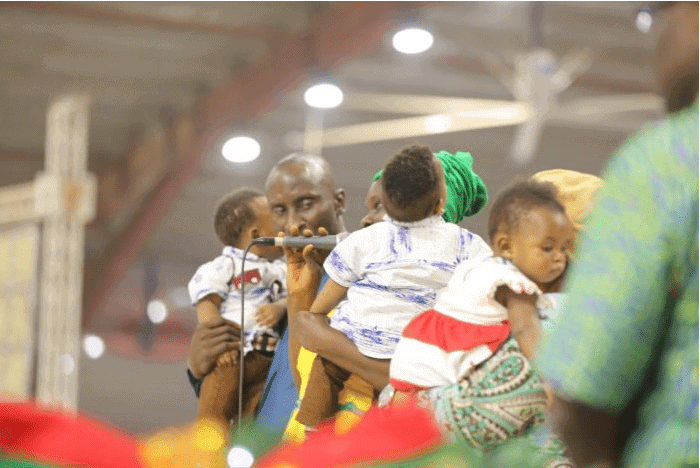 Bayelsa State governor, Seriake Dickson and his wife, Rachael Dickson, who welcomed a set of quadruplets, a boy and three girls in 2016, have revealed that God gave them the bundles of joy after the General Oversea of the Redeemed Christian Church of God, Pastor E.A Adeboye prayed for Rachael

Speaking during the convention on Friday, December 13, 2019 the first lady, alongside all the four children were spotted at the altar of The Arena, the three-kilometre-by three-kilometre auditorium at the Redemption Camp.

Sharing her testimony, she revealed that her testimony is infact what only God could have done. Adding that she had been childless for over 15 years of her marriage to the lawmaker, God used the cleric to rewrite her story

“Praise the Lord! My name is Rachael Dickson. “I want to thank God for taking away my shame and reproach for 15 years; for 15 years, we had been waiting for the fruit of the womb.

“In 2013, when Daddy (Pastor Adeboye) visited Bayelsa State, he prayed for me, and in 2015, I was here for the Holy Ghost Congress.

“In 2016, the shame and reproach were broken with four children – one boy and three girls. I have come to give this great God of Heaven and the God of Daddy GO all the glory and all the honour. Thank you, and God bless you.”

It may be recalled that in 2016, Governor Seriake Dickson and his wife, Rachael Dickson, had welcomed the quadriplets in the United States of America

The overjoyed couple had made the news public through the Chief Press Secretary to Mr. Dickson,  Mr. Iworiso-Markson