Over the weeked, Nigerian high society turned out in their numbers to honour two prominent families whose children: Folajimi Ayomikun Ayodeji, the dashing son of Mr Iranola and Ayotola Ayodeji and Temilade Omotara Ojora, the beautiful daughter of Adedapo and Patricia Ojora had decided to spend the rest of their lives together.

While the groom is the great grand child of the late sage and former Premier of Western Region, Chief Obafemi Awolowo, the bride is the grand daughter of Boardroom guru, Otunba Adekunle Ojora.

The lovers and their familes began the day with a cosy and private traditional wedding ceremony that unfolded at a section of the same arena.

It was a very convivial ceremony as both families exchanged banters and ensureed that the marital rites according to Yoruba Customs and tradition were observed complete with singers and dancers.

The very colourful traditional engagement ceemony which which had Vice President, Prof. Yemi Osinbajo in attendance was rounded off with so much fanfare.

Later that evening a lavish reception was held at the venue. With guests decked in the aso ebi chosen for the occasion, green for the Ojoras and maroon for the Ayodejis the whole venue was bright and beautiful.

Guests were well entertained by Teni and King Sunny Ade and they were also pampered with sumptuous meals and choice drinks. 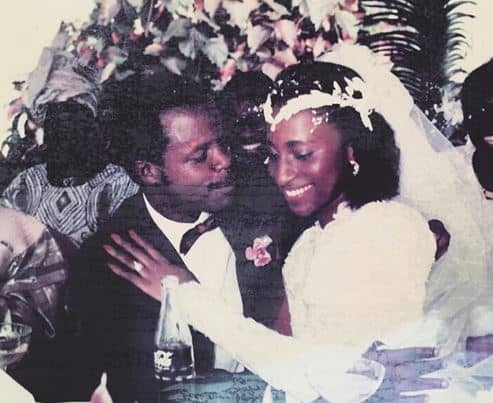