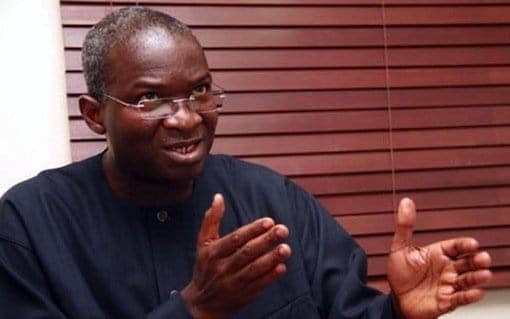 Nigerians have descended on Minister Babatunde Fashola on social media, following his controversial statement on the state of Nigerian roads.

Fashola also said that some parts of the country faced peculiar issues like high water table, which made construction in the rainy season difficult. According to him, the South-East and South-South are among areas with such difficulties.

He also said that the ministry and contractors were waiting patiently for the rains to subside so that they could return to sites.

How we prevented terrorists from bombing Lagos - Fashola

Reacting to the statement, Nigerians have showered curses on the minister.

Below are some of the comments on social media monitored by Kemi Filani News.

One Wendys wrote ” You are mad sir, which roads are not bad? Hananan you people should fear God o “

One Olumuyiwa wrote ” Do people still listen to this lying minister? A man that said that delivering power or electricity is not rocket science but was in charge of power for four years and could not add a single 1MB. He’s staying in Abuja and spewing rubbish, APC men and lies are Siamese twins. Shior “

Nollywood actress, Toyin Abraham, has stressed that all humans are beggars on planet earth.

Posing inside her new Mercedes Benz car, the actress wrote on
Instagram on Wednesday that humans should be humble as we are all begging for
one thing or another.