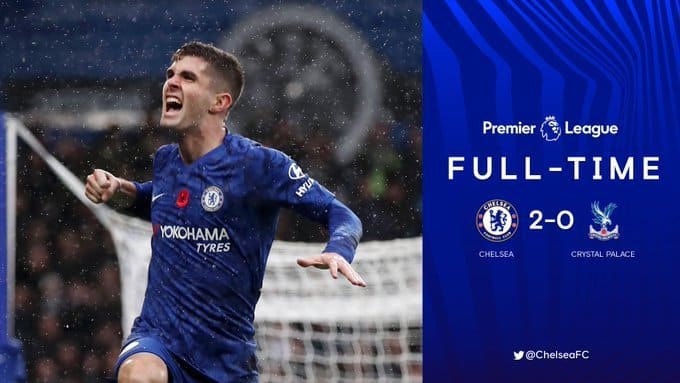 Tammy Abraham scored his 10th Premier League goal for Chelsea as they secured a 2-0 win over Crystal Palace at Stamford Bridge on Saturday.

The 22-year-old striker became the youngest Blues player to reach double figures in the Premier League since Arjen Robben when he swept home following a clever Willian pass.

Chelsea had found clear-cut chances hard to come by against a stubborn Palace side, whose manager Roy Hodgson was taking charge of his 300th game in England’s top flight.

Abraham’s cool finish broke the deadlock, though, before a simple header from Christian Pulisic made certain of a sixth league win in a row for Frank Lampard’s side

Chelsea, whose starting line-up was their youngest in Premier League history at an average age of 24 years and 88 days, certainly started the more exuberantly of the teams and could have gone ahead when Pulisic was denied by Vicente Guaita after turning past Joel Ward.

Palace were not offering much of an attacking threat, but they did seem to have the Chelsea forward line under increasing control, although only a brilliant block from Gary Cahill stopped former team-mate Willian turning the ball in with seconds of the first half left.

Palace’s resistance was broken seven minutes after the restart, though, Abraham slotting confidently past Guaita after being played through by a fine reverse pass from Willian.

Pulisic was then denied by a flying save from Guaita, but the visitors spurned a great chance to level when James Tomkins nodded wide from just seven yards out.

It proved a costly miss as, with 11 minutes to go, Pulisic nodded the ball past Guaita for his first goal at Stamford Bridge after Michy Batshuayi’s shot was blocked.