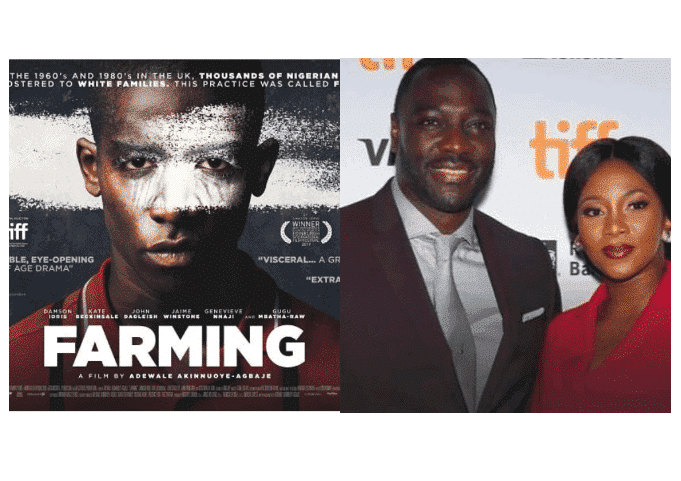 So, few days ago, Damson Idris And Adewale Akinnuoye-Agbaje’s New Film, Farming hit the Cinemas and again, Ella Chioma of Kemi Filani News visited the cinema to give you guys the breakdown of the movie……and of course to know if its worth your N2000.

Damson Idris appeared alongside Genevieve Nnaji in the movie written and directed by the award-winning British-Nigerian actor Adewale Akinnuoye Agbaje.

The storyline of Farming is based on the true life story of Adewale as a young, black man in Tilbury, England. The background and setting of Adewale’s story is amazing.

The main character is Eni, Genevieve Nnaji’s son was given out to a white woman for adoption.

Eni grows up in the British woman’s care, tormented and isolated in an environment that ridicules his dark skin until he was pushed to the wall.

Well, Farming is not for all kinds of people, it was made specifically for deep thinkers and patient people, because at a point you tend to get lost and have to find your way back into the movie.

Although, it was a true life story, but they are better ways it would have been told to make it more captivating.

Sound and pictures quality were near perfect but so many confusing scenes that might make you end up asking yourself if its still same movie.

Genevieve Nnaji’s role, was more like a guest appearance, her impact as a Nollywood goddess was not felt.

However, in all, it ended well and everybody was happy.

Not fully recommended… Not worth the N2000 spent.

You can go see Farming at your own discretion.