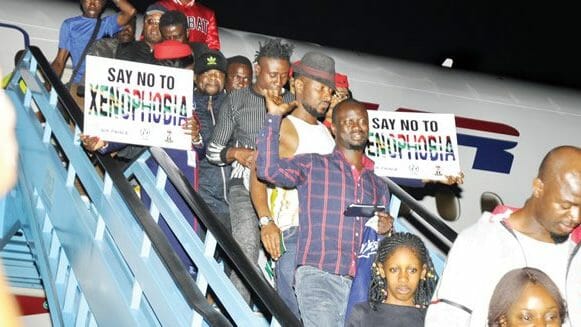 The Lagos State Government has compensated each ber second batch of 319 Nigerians evacuated from South Africa with N20,000.

The fresh batch of returnees arrived a week after another 178 Nigerians fleeing xenophobia came back from South Africa.

The returnees arrived at the Cargo Wing of the Murtala Muhammed International Airport, Lagos, at about 7.21 p.m. aboard an Air Peace B777 aircraft with registration number 5N-BWI.

The flight, which originated from the OR Tambo International Airport, Johannesburg, was received by Abike Dabiri-, Chairman, Nigerians in Diaspora Commission and Air Peace Chairman, Allen Onyema.

Also on ground was Jermaine Sanwo-Olu, Senior Special Assistant to the Lagos State Governor on Diaspora.

Presenting the token on behalf of Governor Babajide Sanwo-Olu, Jermaine Sanwo-Olu said that the money was a palliative for the returnees.

Jermaine Sanwo-Olu said that the returnees from Lagos State would to the Lagos State Employment Trust Fund (LSETF), where be trained on skill acquisition.

It’s an insult to say we shouldn’t spend N5.5bn on cars – Sen. Abdullahi
Commotion over MC Oluomo’s invitation to speak at UNILAG
To Top