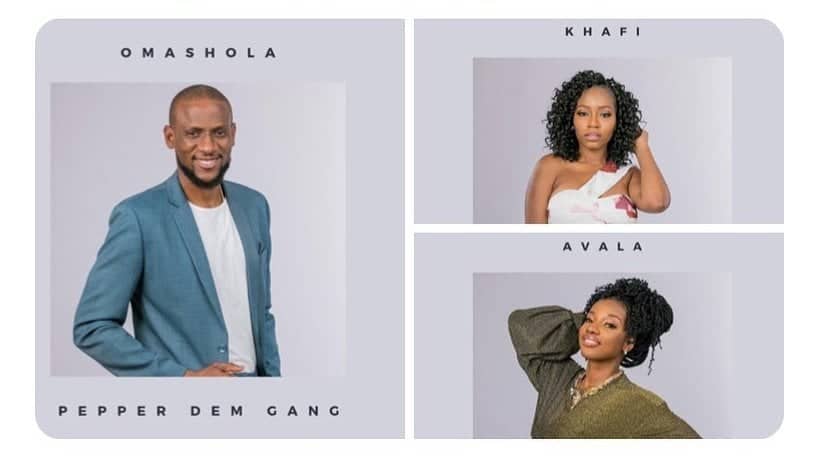 The much anticipated reality TV show BBNaija has now kicked off and this year’s theme is ‘Pepper Dem’.

These are the first three housemates of Big Brother Naija season 4.

Khafi, 29 years old and a police officer in London

Single mom and budding singer Avala is not here to play. Being part of Big Brother Naija is part of pursuing her dreams and she also wants to inspire other young women.

Saidat “Avala” Balogun’s highest point of her life is when she gave birth to her daughter and her single, ‘Give me a chance’. The budding singer studied music and business at York College in Queens, New York.

It’s no wonder then that her top artists include one of the city’s most famous exports, Mary J Blidge. Just like the Queen of Hip Hop, the Ogun State native has ambitions to spread her music all over the world.

What irritates you most about other people: Disloyalty.

What will you do with the prize money: My mom is everything to me. I will build a house for her and my daughter. I also want to invest in real estate.

Why will you be a fan favourite: I’m not there to play, they will see that I’m serious, I’m a single mom pursuing her dream. I want to be an inspiration to a lot of people.

Police officer Khafi Kareem believes that you can have it all if you believe in yourself. She is not only hoping to win the prize money but she wants the exposure that being in Big Brother Naija House brings so that she can do societal good. What people don’t know about her is that she is secretly talented in spoken word, singing and dancing. She is an Ekiti native who resides in London.

What irritates you most in other people: When they try to control me or suppress me from expressing myself freely.

What can make you quit the BB game: If I was forced to something sexual in the Big Brother Naija House.

What will you do with the prize money: I will hire a film crew and host a travel show going to every state in Nigeria showcasing the tourist beauty spots. I would also invest in charitable causes.

Model and Entrepreneur Omashola is originally from Delta calls Lagos home. He loves playing basketball, cooking and “being water, even though I can’t swim”.

Putting his life’s motto “If you want it, go get it – don’t just sit down” into action this year, Omashola got down on one knee and proposed to his girlfriend. But the worst happened; she turned him down!

Now single and focused on building his brand, Omashalo comes into the Big Brother Naija House ready to make his dreams come true.

What irritates you most about other people: I hate liars.

What will you do with the prize money: I will invest and triple it in less than a year.

Why will you be a fan favourite: Because I’m different, I’m special and I have a story to tell.