Femi Bakre who chose his father’s religion, Islam while his younger brother Tobi chose their mother’s religion Christianity got married on Thursday.

The bride @mary_coco is also an IG commdian and has the attribute of an “ajebo” with her looks.

Below are beautiful pictures from the on going wedding ceremony.

Nigerian lady weds US based fiancée via video call 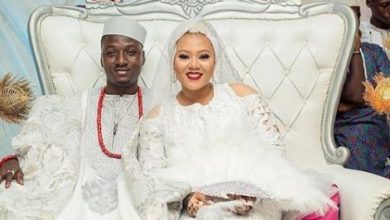