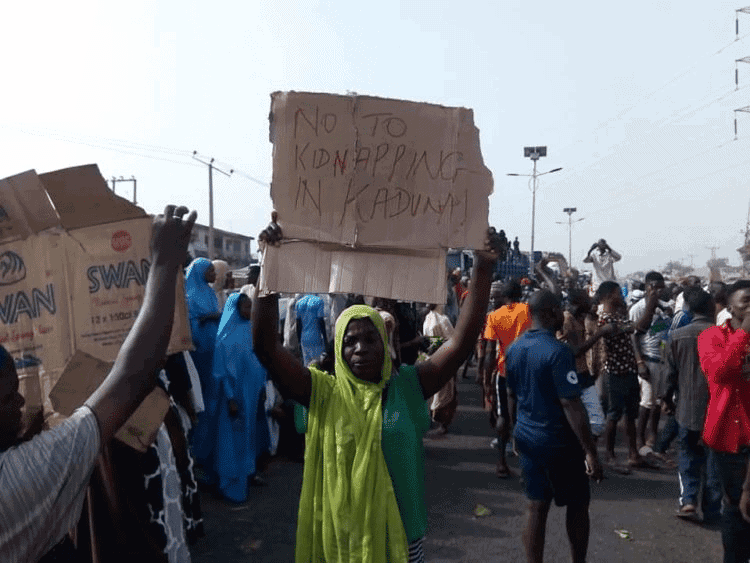 No longer able to condone the constant kidnapping in their state, residents of some

communities in Kaduna State, on Sunday protested against the menace.

The residents of Nariya and Kanama communities blocked the Nnamdi Azikwe Expressway during the protest.

According to reports, a resident of Nariya, Mr. Johanna lamented incessant cases of kidnapping since the last few months saying, “we are no longer safe in our homes.”

Further more, he said, every week, they witness one kidnapping or the other, adding that kidnappers make huge demand of money from family of victims.

“In some cases, the victims lost their lives in the process.

READ
My father moved the motion for Nigeria's independence - FFK

Another resident of Kunama community, Mrs. Iliya Bilkisu said her husband was kidnapped two months ago, but was released after ransom was paid.

“My husband was kidnapped right in the evening at the gate of our house when he was returning from work. He spent three weeks at the den of kidnappers. We even thought, they have killed him. He walked to the house one evening. We were surprised and happy to see him because we paid the money demanded, but they did not release him till after two weeks.”

She called on the law enforcement agencies to strengthen their operations in and around Kaduna to ensure that kidnappers were wiped out from the state.

It would be recalled that on Saturday foreign female tourist and one other were killed , while three others were kidnapped in Kajuru Castle Resort, in Kajuru local government.

APC’s ‘fresh plot against Adeleke’ uncovered!
UTME 2019: How to print your original JAMB result
To Top