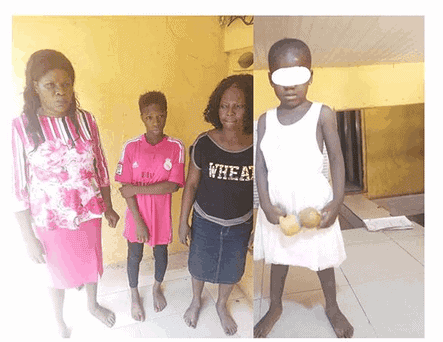 A 42-year-old woman and her 17-year-old daughter have been arrested by the police in Anambra State, for allegedly stealing a 4-year-old girl, Mesoma Ikoko.

Ngozi Ede was said to have arranged with her daughter, Kosiso, and sold the baby for N250, 000 in Awada, Obosi.

The preliminary investigation further led to the arrest of one Ifeoma Okeke, 45, who collected the child from the suspects and handed over her to one Ifeoma Okonkwo of Eke Nkpor.”

READ
Lady lures her three underage siblings into prostitution to ‘keep them busy’ in Edo
SOURCE: