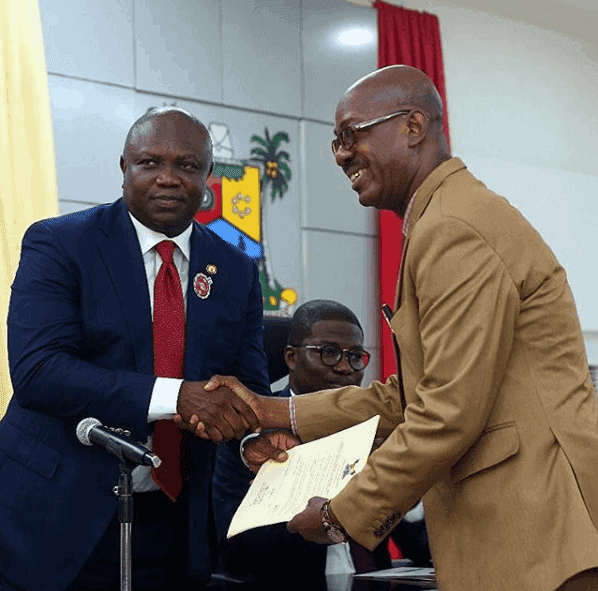 Adekunle Gold has taken to social media to drop a lengthy and emotional post as his dad Permanent Secretary for Education. Moments after his dad was honoured with the post, the singer took to the plattform to make the announcement as he shared a photo of his dad and the current Governor of Lagos State, Akinwunmi Ambode Growing up, I watched my dad worked so hard for too little. Teachers weren’t big earners. But my dad, with the help of my mum, provided everything all 4 of us needed – maybe not wanted, but definitely needed.
I remember when my dad went to Uniben for his first degree. My sisters and I were very young, and communication with him was pretty much impossible, because it was before the era of cellphones. We only saw him when he had school breaks.

He finished as the best in his class with a distinction in Fine Arts, Painting & Graphics Major. He was part of the team that co-wrote the module for teachers at one time. Everyday, after his primary assignment as a Fine Arts teacher in Keke High School, he would go to Teachers’ College to teach other teachers.

He was willing to do whatever it would take to make extra money to fend for us and build a house for us to live in. I almost forgot – he is a published writer. Brilliant Man!

My dad didn’t literally sit me down to teach me great values and diligence. Luckily, he didn’t have to, because I saw it in him everyday.
He has given so much of himself, and truly values the opportunity to be serving the government and every school he’s worked at as either teacher, VP or principal. He’s won about 30 awards for his selfless service to the state.My Dad. A Man!

A man that refuses to cut corners, believes in hard work and is known for his integrity. He always said to me; “Your name is precious, you must protect it!”
Hard as it might be to believe, I can honestly say I’ve never seen him disobey traffic rules or give bribe.
When other principals allowed people use their schools for special centres,
my dad said no. He said – “I have been in service for far too long to let quick money ruin my reputation.” His dream has always been to become a Permanent Secretary of Lagos state. It was his dream, it was also mine for him.
In this moment, this 56 year old brilliant man’s dream is now his reality. Today, I sat in the audience, and I listened as they read out loud, his achievements. I watched as he was sworn in as a Tutor General/Permanent Secretary for Education.

So I cried today, but they were happy tears.