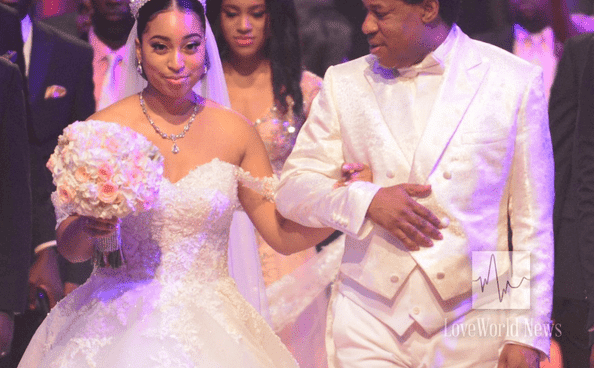 Over the weekend, the much-anticipated Royal Wedding of Pastor Chris Oyakihlome’ daughter, Sharon Oyakhilome, to Phillip Frimpong shut down Lagos.

The LoveWorld Arena Lekki was beautifully arrayed in beige and pastel pink, the colors of the day, and the atmosphere was filled with a resplendent glory.

The ceremony was graced by a host of esteemed dignitaries, from the CEC Members to the BLW CEO, Directors, Zonal Directors and Pastors, former president Obasanjo and of course the globally renowned televangelist, Pastor Benny Hinn, who officiated the wedding.

However, the absence of Anita, the estranged wife of Oyakhilome and mother of the bride was visibly noticed and many wondered why a mum will miss out on such a great celebration of her daughter. You will recall that Anita and Chris Officially divorced each other in 2016.

An Instagram user, Vintage wrote “May GOD restore that home and may our mothers be present on our days of joy and celebration. Cause this day can never be repeated.”

While another wrote “I’ve come to the conclusion that Nigerian women are brain-dead. Most are blaming Anita, when in fact her divorce documents state there was infidelity and unreasonable behaviour. Do you think such a man would’ve allowed her there after exposing him? Of course she didn’t choose not to attend! He probably forbade her!”

While another wrote “Irrespective of their differences the mom should have attended. it’s just a 2 days event. No matter what she would have just attended.its her daughters wedding day! This is my take on it”

Another also wrote “Maybe pastor Chris banned her from coming and as most children of divorce do in Nigerianthey chose the parent with connections and money. I see no reason why Sharon and her sister that lived/live with her mom in the UK( the place pastor Chris banished her to) would not be closer to her. I once went to a wedding ( the groom is my husband’s cousin) where the father of the bride abandoned the bride when she was two, her mother raised her as single Mother from two till her wedding. When it was time for her to marry family people said she has to look for the father and ask for his blessing if not the marriage will be cursed. On the day of the wedding, the father walked her down the aisle, he sat at the high table and the poor mum sat with us at the ‘table for family’ I was just fuming. Patriarch society for you.”

Meanwhile Gospel singer, Nathaniel Bassey in reaction to a comment wrote “I took sometime in my hotel room here praying that God restored that marriage, Let me ask> Have you done so too? And is this comment genuinely out of love and concern or just to stir up strife? Long time ago I made up my mind to be a KINGDOM man, and just denominational. There is so much stuff and division in this body, so take sometime believing for the restoration of that home in Jesus name.” Responding to Nathaniel Bassey’s comment, OAP freeze wrote “Dear Nathaniel Bassey, Please do not take my words as insults, that’s not my intention.
–
But it seems you don’t understand what Christianity means. It’s not your fault though, when perhaps all your life you listened to pulpit lies from deluded people who renamed their village shrines and traditions ‘Christianity’, how will you have proper understanding?
–
The Jesus that you are praying to, why didn’t he heal the marriage of the Samaritan woman at the well in John chapter 4?
–
Let’s examine this critically o…. Oyahkhilome’s first marriage failed and you are praying to Jesus, the Samaritan woman was on her sixth man, after FIVE FAILED MARRIAGES and JESUS NEVER TOLD HER TO FIX HER MARRIAGE O! We all have copies of the Bible, so if you have any contrasting views, kindly show me biblical evidence of where Jesus told her to go fix her marriage or prayed for her dead marriage to work!
–
Jesus NEVER condemned her or prayed for her to go back to her first marriage, HE OFFERED HER LIVING WATER!
–
This world will be better off if we stopped all this pretentiousness and started offering people living water like Jesus did, instead of praying for people who are probably better off without each other, to come back together IN SUFFERING again.
–
Do you know how many people have had their lives destroyed because they were forced to remain in, or return to dead marriages by pastors? Murder, suicide and depression are some of the many consequences.
–
If Jesus did not pray for a Samaritan woman’s marriage to be healed, despite meeting her in person, one on one, let’s stop dragging him into Nigerian marriage issues and focus on the message of salvation which most of you have almost totally ignored.
–
Do have yourself a blessed day, once again I meant no harm, it’s just that the Christianity practiced today is more than 99% lies, thus making it impossible for us to revert to the truth and spirit Christ spoke about, unless we are willing to unlearn and relearn, thereby destroying the delusions first! ~FRZ

Buhari's two months deadline to bandits, the reason for the spike in insecurity in Nigeria – HURIWA

Rumor has it that Governor Ambode is the wealthy man behind Nollywood actress, Mercy Aigbe's newly acquired mansion.

The actress who made headlines few months ago after sharing photos of her new mansion, is now trending on Twitter over the allegation.

Below is a screenshot of the report: They say Mercy Aigbe’s mansion was bought by Governor Ambode (Details, reactions)
Why I performed unclad at an event in London – Brymo
To Top