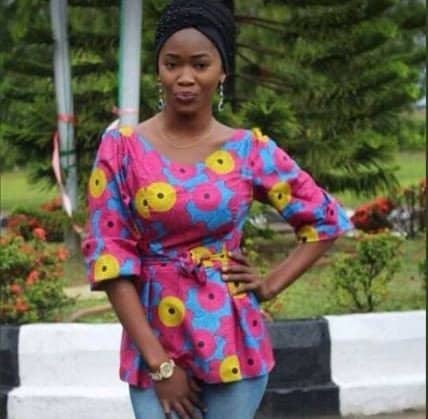 Ondo State Police command has arrested Adeyemi Alao suspected to be the killer of the daughter of former Deputy Governor of the state, Miss Khadijat Oluboyo.

Khadijat, daughter of Lasisi Oluboyo who was also a one-time Commissioner in Ex-Governor Olusegun Mimiko’s Cabinet was found dead in Alao’s residence on Sunday.

Sources said the deceased had died almost six days before her corpse was discovered inside her boyfriend the room.

The suspect was said to be staying permanently in Abuja.

It was learnt that Alao had made attempts to bury Khadijat’s corpse in his house at Oke-Aro area of Akure.According to a source, he had dug a grave in the room, before nemesis caught up with him.

Khadihat, a-20 year old final year student of the Adekunle Ajasin University, Akungba-Akoko was said to be fond of visiting his ex-lover each time he came to Akure from Abuja and usually passed the night with him.

There were speculations that the suspected killer was a “yahoo boy” who planned to use her late girlfriend for rituals Police spokesman, Femi

Joseph, a Superintendent of Police(SP) said the suspect was arrested by a team of detectives from the State Criminal Investigations Department (CID).

He said the suspect, who was already in police custody has been cooperating with the police on relevant information on the circumstances that led to the death of Khadijat.

Joseph said the Commissioner of Police will address the press after they conclude their investigations on the matter.

He assured that the case would be thoroughly investigated with a view to establishing facts behind the death of the Ikare-Akoko born University final year student.

The PPRO said the suspect and others who might have involved in the death of Khadijat would be prosecuted.