Elsie Okpocha, Basketmouth’s wife was a year older on the 13th of July and over the weekend her husband held a party for her at home.

One of the richest man in Nigeria, Femi Otedola was also spotted at the event and we brought you first photos from it.

”My Birthday Party was LIT!!!!!!
A big thank you to everyone who came through
Still overwhelmed by all the love,you all made my day❤️?❤️?❤️?
#julygirl
#july13th”

According to the love story shared by the comedian who is currently one of Nigeria’s most influential humour merchants, they met in 2003 before deciding to tie the knot in 2010. ‘I met her in 2003, I fell in love with her in 2004, we dated for 6 years and in November 2010, the journey to forever started,’ he said.

Sergio Ramos engages his girlfriend whom he has 3 kids with

32-year old Sergio Ramos popped the question while on holiday with his 40-year old girlfriend of six years who accepted the proposal which he made at a romantic dinner on Monday evening.

Ramos shared the news on Instagram with two pictures of himself accompanied by his bride-to-be and her new huge ring.

The images were captioned with a simple: ‘She said yes. I love you… forever.’

Sergio Ramos has been dating Spanish TV presenter and journalist, Rubio, since 2012. They have three children together, all boys.

DMW Boss, Davido has confirmed the reports stating that he is set to sell out the 20,000 sitting capacity O2 Arena in London, just like Wizkid

Davido, who was recently asked what’s next after Wizkid’s concert and Davio said:
“My Brother Did It, I’m About To Do It” 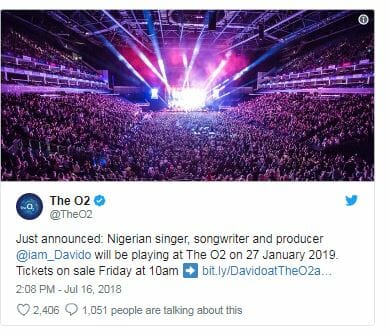 It may be recalled that in May, Wizkid broke the internet after he sold-out his Afrorepublik concert at the O2 Arena.

In like manner, sensational singer and alternative Afropop singer, Adekunle Gold, recently held a sold-out solo concert at, her sister venue, Indigo O2 in London.The Indigo at the O2 venue...

Cristiano Ronaldo has said he doesn't see Barcelona's Lionel Messi as a rival despite many people viewing them in that light. He made this statement during his unveiling as a Juventus player after completing a €112m move from Real Madrid.

Both players have been considered as the best in the world for the last decade and have been at the heart of the rivalry between Real Madrid and Barcelona since Ronaldo moved to La Liga in 2009.

However, the battle between Messi and Ronaldo may no longer have the same intensity after the 33-year-old was officially unveiled as a Juventus player on Monday. The Portuguese is now looking forward to replicating his incredible goalscoring record in Italy and win titles with his fourth different club.

When asked about his rivalry with Messi, Ronaldo replied: ‘I do not see other players as rivals, that’s not who I am. ‘It was a...