In what appears to be an extreme case of domestic violence, a 35 year old woman has been confirmed dead after her husband beat her up for accepting a gift of N200

The husband of the deceased, a 40 year old man identified as Henry Anaele, whose plea was not taken, had appeared on a charge for murder has been remanded in prison by an Ebute Meta Chief Magistrates’ Court for beating his wife to death over N200 gift she collected from an individual.

The Chief Magistrate, O.O. Olatunji, said the accused should be remanded at the Ikoyi Prisons pending advice from the State Director of Public prosecutions (DPP).

READ  Arrests have been made over abduction of my twins - Akewugbagold

Prior to the judgement passed, a police inspector identified as Cousin Adams, told the court that the accused had committed the offence on June 15, at about 11.45 p.m, at No. 72, Goodness Estate, Satellite Town, Lagos.

According to Mr Adams, the accused had found out that someone gave his wife– Chinyere, the sum of N200, which did not go down well with him. Upon questioning her, he claimed she could not give any tangible answer as to why she would accept the money from the giver.

“This angered the accused who beat up his wife to death for collecting the money. He made an attempt to escape but was apprehended by neigbours and then handed over to the police’’

The offence contravened Section 223 of the Criminal Law of Lagos State, 2015 which prescribes a death sentence for offenders.

The magistrate adjourned the case until Aug. 6. 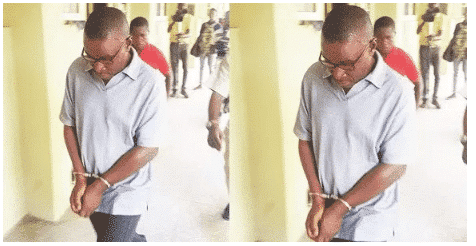