An inter tribal marriage between an Igbo young man identified as David Chinedu and a his lover, Oluwakemi, who has Yoruba origin is set to take place very soon after the groom to be led his lover to the middle of the river, for a boat cruise proposal

Halfway the ride on the water, enjoying the romance, the love struck man asked his long time girlfriend to marry him and she said Yes!

Davido finally shows off his son, Ifeanyi’s face and it is in a special way (photo)

Policeman kills lady who was meant to finish her NYSC, tomorrow, in Abuja

A Corp member has lost her life earlier today after she was allegedly shot by a policeman. The corp member identified as Miss Linda Angela Igwetu was meant to finish her National Youth Service Corps (NYSC) program tommorrow was shot by a police official

It was gathered that despite her condition, she was abandoned without emergency health care until she bled to death

A popular twitter handle @segalink, gave more details on the sad occurrence in a post which read;

We lost Miss Linda Nkechi Igwetu, a youth corper serving in Abuja to yet another avoidable impunity of Police earlier this morning. A police Officer shot at their car...

It is no more a hidden fact that former housemate in the BBNaija 2018 reality tv show, Princess Onyejekwe took the decision to have surgery in order to get the perfect body she always desired

The beautiful young lady who has always aired her plans to go under the knife to get trim, while she was in the Big Brother house, and she was sure to keep to her words even though not many people expected her to

Upon a successful surgery, and indirectly a brand new self esteem, Princess would stop at nothing to flaunt the enhanced body

Evidently happy with her new curves, she has released some new photos of herself and all the non fans who trolled her on social media appear to be getting used... 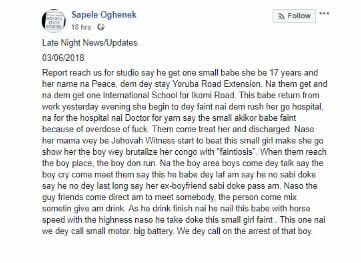 It was gathered that the girl identified simply as Peace felt dizzy and fainted after he lover who drag some unknown concoction before the sexual act, made love to her

Even-though she was soon discharged after receiving treatment in the hospital she was immediately rushed to, the medical practitioners revealed the cause of her weakness as excessive sex

Little did she know that the drama had only just started as her mother beat her up and told her to take her to the boy responsible!

Not knowing what step to take, the teenage girl took her mother...

Policeman kills lady who was meant to finish her NYSC, tomorrow, in Abuja
6 years old Nigerian boy drowns to death in a pool (Photo)
To Top