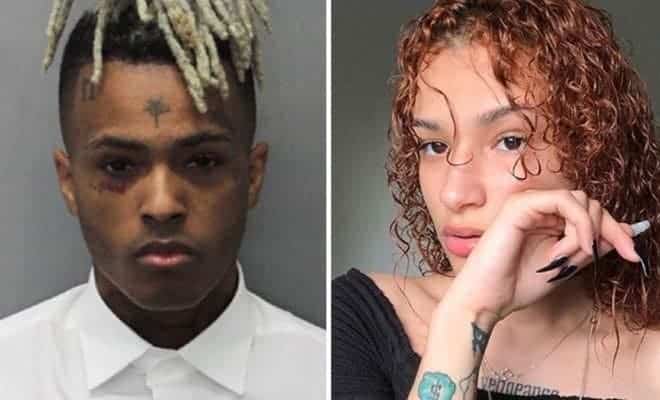 Girlfriend of late rapper XXXTentacion, Geneva Ayala has cried out on social media where she shared a picture showing the gifts which she left at his candle light vigil, which have now been burnt. In an earlier post, she shared a picture of the gifts and wrote about how she was kicked out of the ceremony.

”they kicked me out of the vigil. so damn disrespectful. i can’t believe people are that selfish. i wasn’t even there 25 minutes and i literally got pulled away from the memorial. i just wanted to stay. i wasn’t bothering anyone. this is unfair. i’m absolutely devastated. THEY BURNED THE SHIT I LEFT THEY BURNED WHAT I BROUGHT FOR HIM IM SO MAD LIKE IM SCREAMING,” she said. Later, Geneva Ayala who once accused XXXTentacion of domestic violence which got him arrested, shared another picture showing her gifts burnt.

”i left those those things for him. i didn’t bother anyone. i said nothing to no one. i can’t believe they’d do that. how did they let that happen. why would anyone let that happen, where is the respect? the globe, board, flowers and candles i brought for him were placed BEHIND THE CAUTION TAPE, AND THEY LET THEM GET THE SHIT AND SET IT ALL ON FIRE. he would’ve wanted me there. i have no f8cking words.” Rapper XXXTentacion was found dead in his car after exiting a store. Keyla Concepción, Broward County sheriff department public information officer, said the 20-year-old rapper whose real name is Jahseh Onfroy, was leaving a store when a dark colored SUV pulled up and shot at him.

A dispatch audio stated that there were “multiple shots” fired in what was a “possible drive-by”, describing the victim as a “level 1” trauma patient with a “gunshot wound” and the suspects as two black males wearing hoodies and one of them a red mask.