Vanguard editorial board chairman, Ochereome Nnanna has finally apologised over his ethnic slur

Upon facing series of backlash for saying Yorubas are sophisticated morons, the Vanguard Editorial Chairman has publicly apologised via the same means he used to commit the initial blunder

His apology post read;
From the bottom of my heart i thank you all for expressing your feelings, I have forgiven all. Forgive me too. Let’s be friends again

The Drama had staerted when Areh Sunday, a journalist and an aide to Delta State Governor, while reacting to President Muhammadu Buhari’s declaration of June 12 as Democracy day on Thursday had gone to his Facebook page to express his disappointment in Yorubas for falling for the antics of the government of the day.

He posted:
“I use to think the South-West was very sophisticated. I was wrong. They are the most gullible. They fall for every poisoned carrot dangled before them”


With the level of chaos caused by the bigotry over the weekend, Vanguard was forced to deny having involvement with Nnanna’s comment in an official press released statement 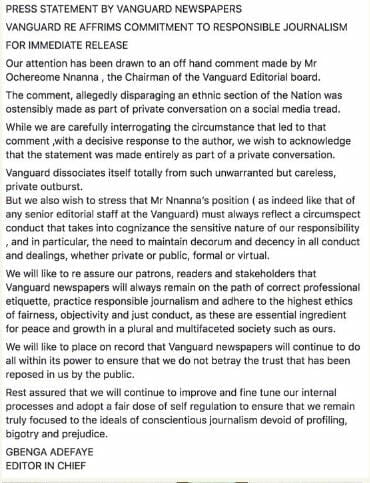 Nollywood Actress Bose Alao has apologized to her husband for exposing her him for always beating her.

The young lady who celebrated their 10years wedding anniversary, publicly announced the end of their marriage, just a day after via her Whatsapp status

She has taken to social media account to apologise in a public statement, aknowledging that there was indeed a case of domestic violence, however, she was as guilty as her husband in the case scenario

She added that they were both seeking help, and she had done that on her whatsapp status, with th intention for him to see it

She noted that she is not vast with social media tools, which led to her issue going public “I will be deceiving myself to say nothing happened or pretend I didn’t see...

He died in the early hours of today at the age of 60. Ras Kimono was said to have concluded plans to travel to the United States last night, only to start complaining of feeling funny.

He was rushed to a hospital in Ikeja, where he was later taken to Lagoon Hospital on the Island where he died.

Ras Kimono was a Nigerian reggae artist whose debut album Under Pressure, led by the single "Rum-Bar Stylée", was a big hit in the Nigerian music scene in 1989.

Before he released his solo album, he was in a group called The Jastix along with Amos McRoy and Majek Fashek.

Ekeleke Elumelu, in "Delta State", Nigeria, He started out his career, firstly as a student of Gbenoba Secondary School...

The traditional wedding of Musa, the son of former military leader, Yakubu Gowon, and his Edo bride, took place yesterday.

Musa who was in the news in March 2016 after the former military leader finally accepted him 48 years after he was born upon conclusion of a DNA test, got married to his long time fiancee, Vivienne Agbonkhese in Benin city.

Check out photos from the wedding; Reggae artiste, Ras Kimono is dead (Details)
‘Our last discussion was for you to meet with my manager in America before death took you away’ – Majek Fashek mourns Ras Kimono
To Top