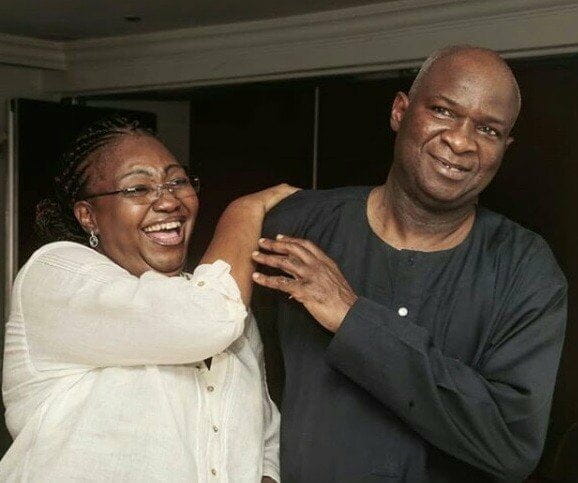 The marriage of Minister of Power, Works and Housing, Babatunde Fashola and wife Abimbola is 25 today, May 1. They celebrated the anniversary in style as photo of them cutting their anniversary cake has surfaced online. The former Lagos State Governor and his wife got married in 1993 and they have children.

Mrs Emmanuella Abimbola Fashola, the wife of Lagos state Governor, Babatunde Raji Fashola disclosed sometime ago in a chat with City People that her love story with her husband was a funny one, adding that she was introduced to her husband by his father during her friend’s engagement.

Showering accolades on her husband of 22 years, the First Lady said on meeting her husband, she knew he was down to earth, adding that her lovely husband is a friendly man.

“I met my husband at age 27. That was at my best friend’s engagement then. I was serving and making sure everyone was okay and well taken care of, attending to people and all that. And then his father saw me and said ‘I have a son and I will like you to meet my son.’ So I said no problem sir. He said ‘good, my son will soon come in.’

“When he came, we introduced ourselves. We met. We exchanged our numbers and that was it. We took it off from there. He was cool, he looked cool-headed. He was friendly. He had no airs about him. He was a simple fellow. He was already working then as a lawyer.

Despite the difference in religion, Mrs Fashola said she doesn’t have any trouble getting along with her husband, adding that she has a segment in the house where she worships her God and so does her husband.

“But ever since then, my husband has practiced his religion and I have practiced mine. There is no trouble whatsoever. My husband has his own part of the house where he prays, I have my own altar there with my crucifix and my rosary and everything and everyone is minding their own business. When its time for family prayer, we pray. I pray mine to the name of Jesus Christ while he prays in Allah’s name & the children understand all that. My children are baptized and they go to church. When he wants them to go to mosque with him they go to the mosque with him,” She revealed.