It is rather appalling that some men derive pleasure from sexual intercourse with underage girls and some go as far as doing it with their daughters.

A Nigerian man identified as Dominic Johnson was arrested and has been charged to court for sleeping with his own 14-year-old daughter.

According to PM Express, Johnson was charged to the Ikeja magistrate court on Wednesday, March 14.

It was further reported that the man did not get his teenage daughter pregnant but she has given birth to a baby girl.

Both mother and child were present in court when Johnson was arraigned. Johnson was said to have resorted to his daughter after the death of his wife who gave birth to three children.

However, the man warned his daughter not to tell anyone but she could no longer hide the paternity of the child when she put to bed. It was gathered that the victim finally revealed to the sister and Johnson was confronted.

He immediately threatened to kill them including the baby. The case was first reported to the Ikotun police division before it was transferred to the gender section at the Lagos state police command, Ikeja.

Johnson disclosed to the police that his wife died and had no money to marry another woman, so he was tempted to sleep with his daughter without intentions of getting her pregnant.

Man apprehended for withdrawing money without ‘ATM card’ in Ibadan

Following this statement he was found culpable and arraigned in court for defiling a minor.

However, his plea was not taken as the presiding magistrate ordered him to be remanded in prison without an option of bail. The case has been adjourned till May 8.

US based model, Mary Timms reacts to news of 9 yr old girl raped by a 31 yr old man

A US based model Identified as Mary Timms has called on the government and other human rights agencies to llok into the case of a 9 year old girl who was raped by a 31 year old man in Bayelsa. According to the story, the man lured the young girl with just N20 note and defiled her.

Read her message below.

''It breaks my heart to read over the Internet the several cases of Rape of minors and young ladies. Situations like these gave birth to my passion to fight against this inhumanity to man. Where are going to? Tears run down my eyes when I hear these sad stories and the pains these little girls tend to live with forever. Though, Rape can be either way, but cases of underaged ladies are becoming prevelent by the day.

It beats my imagination why a 31 year old man in...

It appears the social media war of words between music producer, Samklef and OAP Daddy Freeze is not ending anytime soon as Freeze has thrown another shade at the music producer.

He uploaded the cover of popular primary school book 'Akin goes to school', this time he had Akin's name substituted with Samklef's name. He also had Samklef's face photoshopped into Akin's.

The beef between them started when Samklef took to twitter to tell Freeze that his constant criticism of pastors is fast getting boring. In response, Freeze told him to unfollow his message cos they are not meant for slaves. He also called him an insipid cretin.

Well when we all thought the beef had died down, it got resurrected again on Instagram. Read Samklef’s post below.

Below is a lovely picture shared by Ghanaian actres, Moesha Boduong in which she looks royal as she flaunted her curves and hip tattoo.

Speaking on The Late Afternoon Show with Berla Mundi on GhOne TV, Moesha Boduong indicated that she’s likely to undergo liposuction after she’s had babies. This she said to quell rumors that she had already undergone the procedure.

The actress insisted that her curvy figure was acquired through 3 years of waist training and detox and not liposuction like it was widely believed. 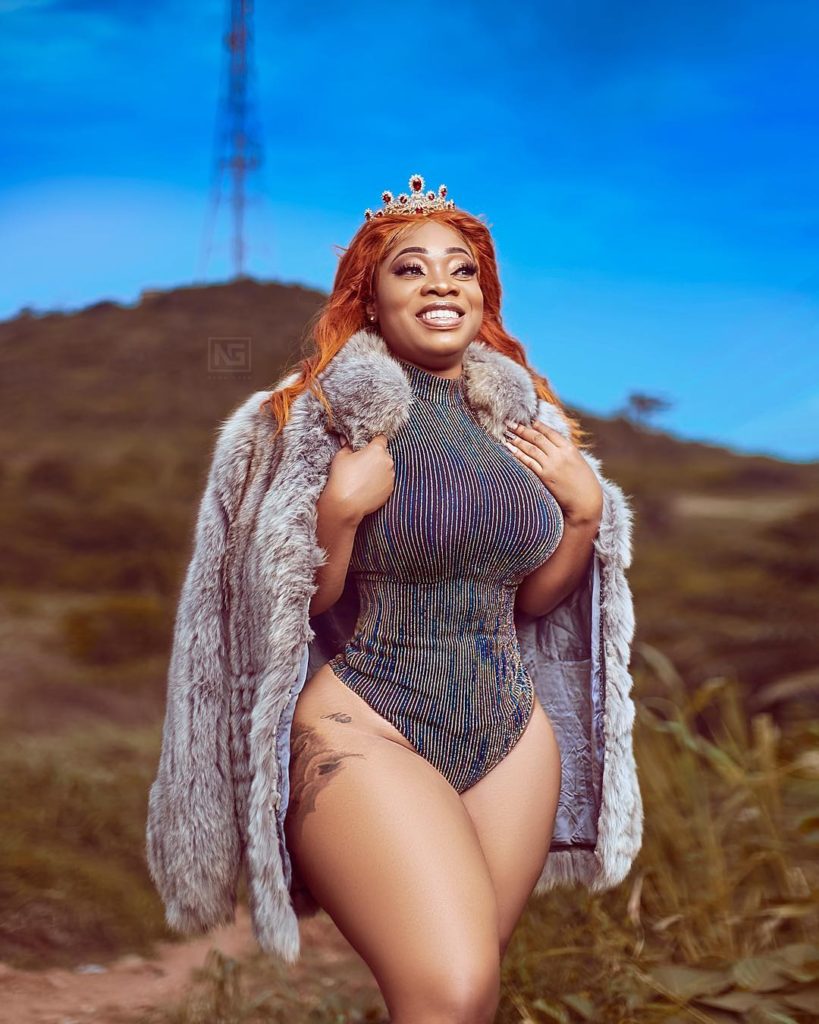 According to webmd, Liposuction is a cosmetic procedure that removes fat that you can’t seem to get rid of through diet and exercise.

A plastic or dermatologic surgeon usually does the procedure on your hips, belly, thighs, buttocks, or face to improve their shape. But liposuction can also be done with other plastic surgeries, including face lifts, breast...