The Permanent Secretary of Ministry Of Agriculture, Lagos State has given the reason why the COVID 19 palliatives was stored in a...
Read more
Home Entertainment Dbanj acquires new Ikoyi mansion
Facebook
Twitter
Pinterest
WhatsApp 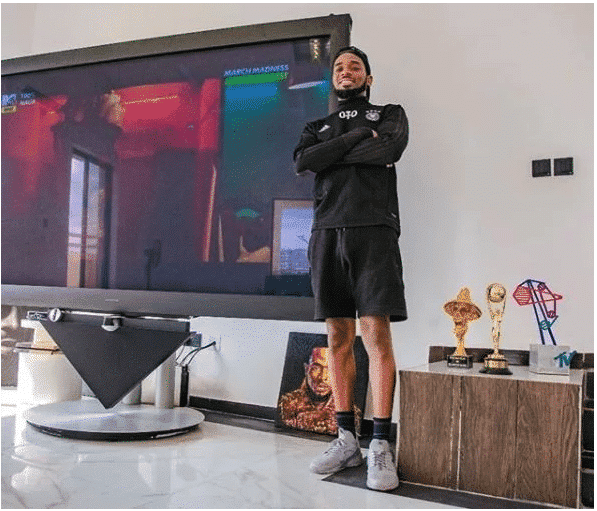 Dbanj silently moved into the property a few weeks ago leaving his long time Lekki Phase One residence which has now been converted to his office. See another photo of his massive living room below…

D’banj, also known as the Kokomaster or Bangalee, was born in June 9, 1980 in Zaria, the northern part of Nigeria to a military officer who commanded an artillery regiment and a devout church dignitary businesswoman who hailed from Shagamu in Ogun State.

Due to his father’s profession he moved several times within Nigeria and later moved to England.

D’banj was expected to follow his father’s military career and was enrolled to the Nigerian Military School at age eleven. However, D’banj resisted the system and disenrolled from the school after three years.

While at the Military school he was a member of the elite drum corp of the Nigerian Army. From the Nigerian Military School he proceeded to another military owned institution Nigerian Navy Secondary School, Ibara, Abeokuta where he was a church worker. There he completed his secondary school education.

He adopted the stage name D’banj, a combination of his first name, Dapo, and his surname, Oyebanjo. D’banj is currently best known internationally for his 2012 summer hit “Oliver Twist”, an uptempo dance fusion of Afrobeat and electronic dance music that topped the African charts 2011 and was a top 10 hit in the UK singles chart in 2012 reaching No. 2 on the UK R&B chart. As of 2016, D’banj is ranked to be the richest solo musician in Nigeria according to T.I.N Magazine

In 2017, He released the album titled King Don Come, with guest features from the likes of Gucci Mane, Wande Coal, Harry Songs, Bucie, Busiswa etc in August. The album includes singles ‘It’s Not A Lie’, ‘El Chapo as well as his 2012 mega hit ‘Oliver Twist’.