105 schoolgirls kidnapped by the Boko Haram jihadist group in Dapchi, northeastern Nigeria, were reunited with their families on Sunday after spending nearly five weeks in captivity.

The 105 girls, covered head to toe in burkas, arrived aboard five buses in the town of Dapchi, in Yobe state, where they were greeted by their parents at the boarding school where they were snatched on February 19.

After their release on Wednesday they had spent three days in the national capital Abuja where they were greeted by President Muhammadu Buhari.

Kachalla Bukar, the father of one of the girls who is spokesman for the parents, said they were flown to the major northern city of Maiduguri from Abuja, then transferred under military escort to Dapchi.

Top officials were on hand for a solemn ceremony in which the parents regained custody of their children.

The girls were among 111 who were seized, of whom five died apparently during the violent hostage-taking or in the trucks that took them away.

Their release leaves one schoolgirl, Leah Sharibu, still in the hands of the kidnappers, reportedly because she is a Christian who refused to convert to Islam.

Buhari on Friday pledged to do “everything in our power” to obtain Leah’s freedom.

Authorities earlier expressed optimism that Leah would be released at the weekend.

The police “reiterates that it has no information yet on the release of the last Dapchi schoolgirl,” he said.

Held on Lake Chad island
According to witnesses contacted by AFP, the girls were held on an island on Lake Chad, which is a known stronghold for fighters loyal to Boko Haram factional leader Abu Mus’ab al-Barnawi.

The Dapchi kidnapping revived painful memories in Nigeria of the April 2014 abduction of over 200 schoolgirls from Chibok, a town also in the northeast, which caused global outrage.

While some of the Chibok girls have been freed in exchange for ransom and the release of top Boko Haram commanders, a total of 112 remain in captivity.

Boko Haram — which means “Western education is forbidden” in Islam — has repeatedly targeted schools providing Western education in the mainly Muslim region as part of an insurgency that has killed at least 20,000 people and displaced more than 2.6 million since 2009.

While a 2015 offensive launched by Buhari successfully reclaimed swathes of territory back from the jihadists in Nigeria, the group still stages deadly attacks on both military targets and civilians.

These three siblings were wiped out by candle fire (Photo) 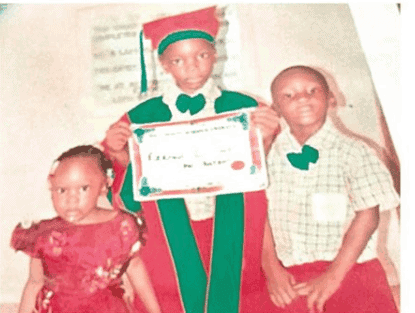 Three children identified as Chidera, Destiny and Precious at age 7, 5 and 3 respectively have died, following a candle fire which razed a house in Abia State.

It was reported that the candle fire which affected the room the kids were locked in, started just after their mother stepped out to charge her phone in her uncle’s house in Ohia, Abia State,...

‘Wealth and power knows no religion’ – Niyi Akinmolayan captions this photo of Bill Gates, Osinbajo & Dangote
See how a woman set up her husband with her sister so she could divorce him
To Top