The Lagos government has compensated the children of police officers who died during the End SARS crisis in the state with full scholarships up...
Read more
Home News A Second class upper graduate of Olabisi Onabanjo University rides keke to...
Facebook
Twitter
Pinterest
WhatsApp 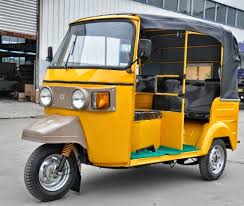 Nigerian woman identified as Stella Adele has resorted to driving the popular commercial tricycle commonly known as keke napep because of inflexibility of white collar jobs.

According to the 2.1 graduate of Olabisi Onabanjo, in Ago Iwoye, Ogun state, she had embraced the more flexible and lucrative job of a keke driver due to tight schedules that comes with white collar jobs .

She said she started the job after her police friend revealed how profitable the job was.

With the support of her brother and a loan from the bank she was able to get her own tricycle. Stella who is absolutely enjoying her job reveals she makes between 8 to 12,000 Naira daily and minimum of 7000 on days she won’t resume work on time.

Revealing that she is working towards getting a bus as she plans to further expand her business, many of her colleagues commended her and revealed she is very hardworking and brave, though the business is a male dominated one she has been able to navigate her way to success