A grandma identified as John Victoria, has been arrested for setting her 9-year-old grandkid, John Kehinde on fire on her two hands, for allegedly eating the food that belonged to her brother in Osun State.

According to the Public Relations Officer of the Nigeria Security and Civil Defence Corps in Osun state, Babawale, the incident happened on Tuesday around 1:45pm in Erin-Osun.

The victim is said to be a primary three pupil of Africa Elementary school in Erin osun. Kehinde was said to have lost her mother at a tender age and has been living with her grandmother since.

She has been taken to a primary health care at Erin osun for treatment. The security agency said the case is now at the Human Trafficking and child Abuse department of the NSCDC command, Osun state.

Meanwhile, a woman allegedly burned the palm of her young grandson as punishment for unknown offence in New Kru town, Liberia, yesterday.

Below is the report by Amos Sumo, National Assistant Secretary at Liberia National Children and Youth Advisory Board:

“Respect the Rights of a Child.

Now, We must end Corporal punishment!!
Some parents continue to Violet the Rights of children, due to the poor justice system they often walk with impunity. It was reported yester week that a little boy in the Borough of New Kru town was dehumanized by his Grandmother for reason best known to herself.
This is a cross violation of the 2011 Children Law of Liberia, the Universal Declaration of Human Rights and the Maputo Protocol.
We’re calling on the Liberia National Police to launch an immediate investigation into this case.
At the same time, the victim should be seeking medical attention at Liberia’s biggest referral hospital, so as to; save his life.
And also, the Ministry of Gender, Children and Social Protection, Plan International Liberia, and Defense for Children International to collectively support the National Children and Youth Advisory Board in this advocacy for justice.

# We must commit our next President to Protecting the Rights of

The family of Chief Chijioke Uwah, has been mourning since December 15th 2017 following a serious road accident that killed 13-year-old Chijioke jr, son of Esther Uwah one of his Chijioke’s wives.

The fatal accident happened after the Peoples Democratic Party PDP convention which took place in Abuja, as he set out for Enugu from Abuja with five of his children on 15/12/2017.

According to reports, the family left Abuja at the wee hour of 4:00 am and had already passed Lokoja and Anyimgba in Kogi state when suddenly an unguided infant was crossing the highway.

In a bid to avoid hitting the child, the driver (Chijioke Uwah) hit the brake immediately and at the same time turned the steering as the car somersaulted and threw away the son...

Below is a photo story of how a young woman who was trapped in mud under the third mainland bridge was rescued today by Lagos state Emergency Management Agency (LASEMA).

The woman was rescued from the mud where the sand filling of the Oworonsoki end of the Third mainland bridge is currently been landfilled.

LASEMA official rescued the woman from the mud alive.

A destitute was also rescued from almost the same spot some weeks ago in December 2017.

Photos of the notorious Bomb Makers arrested in Edo State

By Tireni Adebayo
Policemen in Edo state have arrested some suspected criminals at a bomb factory in Iddo, Okpella, in Estako East local government area of Edo State after an explosion in the area.
A report by the Nation revealed that those arrested were bomb makers. Some of the suspects were killed in the explosion while another person’s leg was also chopped off by the blast. 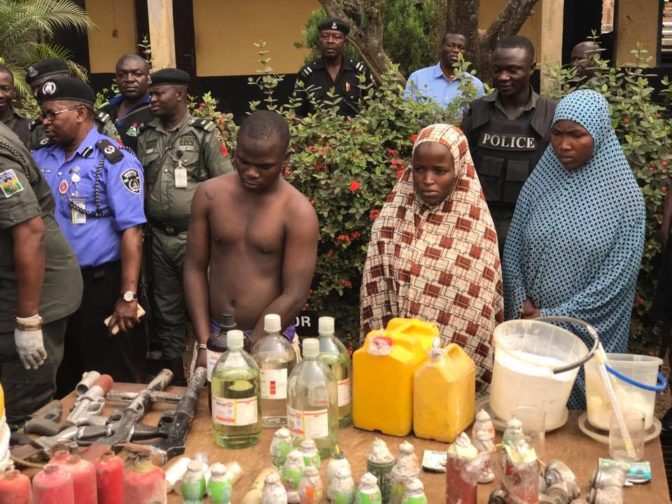 The building where the suspected bombs were manufactured is a three- bedroom apartment which the villagers said was occupied by some men from Kogi State.
Eyewitnesses said they ran for safety when they heard the explosion on Monday evening. One of the occupants, who reportedly escaped with a car loaded with prepared explosives, arms and ammunitions, abandoned the vehicle along a bush path and fled. 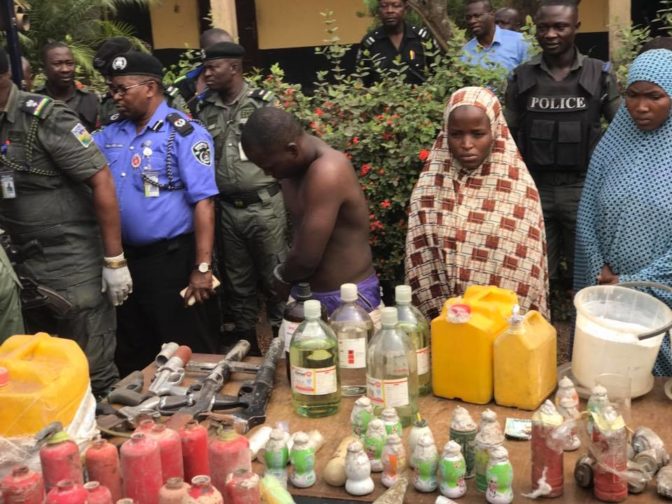