An Ebonyi state based young man identified as David Ajali has been killed by his wife..

Details are quite sketchy right now, and according to reports, his body has been deposited at the Izukanne motuary Akaeze in Ebonyi state.

Recall that last night, a Nigerian man identified as Ugochukwu Okeke A.K. A Alino,was beaten to death by his wife, Chinenye Adaeze Okeke, and his apprentice, who his wife was allegedly having an affair with.

Okada ban: Horses troop in their numbers on Lagos streets as alternative means of transport

The wife and her lover ran out of luck, as they were apprehended and now being held in a police station in Yauonde. The couple reportedly had 5 children together. 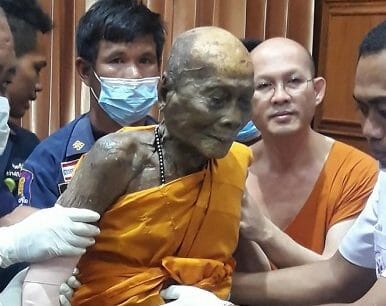 A Revered monk, Luang Phor Pian died on November 16 last year in Bangkok, Thailand when he was 92-years-old. Spectators snapped pictures of the moment show a 'smiling' deceased Buddhist monk being exhumed by his dedicated followers - two months after he died.

The photos were shared on social media. How a diabetic businessman was duped of N190M by an herbalist
Ganiu Bankusa (Peiro) shot dead by gunmen in Idumota, Lagos (photos)
To Top