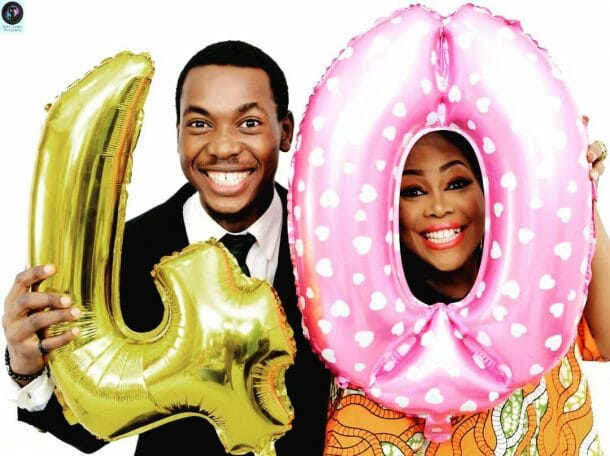 Toyin Alausa? Remember her? She played a prominent role in Bukky Wright’s movie “Omotara Johnson” and in many other films and soaps. On January 4, 2018, she clocked 40 and shared some photos of her and her 23-year-old son, Rotimi Muyiwa. In this interview, she narrates how she became a mum at 17,

How old were you then?
I was 17. Yes, that was the period. I had my baby; and like I said, you now have to start correcting the mistake you have made. All in all, it was a wonderful experience that I can never trade away today. I thank God I had him then, though early. As I said earlier, my youth really got me prepared for what lies ahead of me. As an individual, I already knew what I wanted and how I wanted it, so I would just say it is a blessing that it happened then.

You mum must have been very disappointed in you, knowing that she was always cautioning you.
She took me in, washed me, cleaned me up and put my feet firmly on ground such that I had to start and do it right. I would say ever since then, our bond got tighter as mother and child. She is a mother any human being will ever wish for. A lot of people gave her all sorts of advice.

Did she feel she didn’t do enough to caution you?
She just attributed it to destiny. I am the only child; so, if I had to be at home, I would be locked up in the house. But as a mischievous child, I devised a means of still going out to play with my friends. Of course, it wasn’t anything naughty. But a child needs people around him or her. So, it is not really nice when a child is alone in a massive compound because he or she might get naughty. And at times, you get tired of being alone.

So, you wanted to explore?
Yes, you are right.

And then, you abused the freedom in the process?
When the people who are supposed to shape you are not around, you tend to miss your ways. I guess that was what happened and I made my mistakes in time and corrected them in time.

Did you attempt to abort the pregnancy?
Yes, I did. But it didn’t work for me.

How?
I was asked to use some pills; but you know, destiny is destiny. He was meant to come and he came. He couldn’t even be aborted. There are children out there whose parents did everything humanly possible to terminate them, but they still came. There are reasons why the abortion would fail and it is only God who knows the reason. And if you are lucky not to get it terminated, you will see the reason. Honestly, I don’t think it is a good option, but it is as old as prostitution.

Why did you consider abortion when you knew the man who was responsible for the pregnancy?

I was a teenager, so I probably would not have made any good decision on my own. I couldn’t even allow my mum to know in time. In fact, I didn’t even know I was pregnant until I was way gone, so that is why I said he is a destiny child.

Like how many months?
I was about five months gone! By the time I knew and thought of abortion, nobody would want to do that for me.

What advice will you give teenagers who are pregnant now?
I am worried about teenagers nowadays. I have seen and heard all sorts. I don’t know what to do, but I just believe that God, the government, the NGOs, parents, teachers, guardians and good citizens of Nigeria should help to shape the young ones coming behind us. They have lost it. The mistake I have made, I have been able to correct them by myself. But I have seen and heard of other cases where people could not correct themselves and their lives went in shambles. That you are not a graduate is not an excuse. Also, ignorance is not an excuse. If you don’t learn a trade or do anything to improve your life and you expect manna to come from Heavens,
you will either steal or prostitute; and if you do either of these, you will end up destroying your destiny. But if you know you have a good plan for yourself, you should try and stay under your parents and obey the laws. I am not saying you can’t come across one or two misfortunes in life, but you can avoid it when you stay on the right tracks.

Was it a case of infatuation or love?
It was infatuation. It couldn’t have been real love because I didn’t know what real love was then.

How do you relate to your son now?

I relate to him very well. I call him my correction. Everything I did wrong, he is doing it right. He is a
wonderful young chap. Every mother will say that about her child. But when outsiders say that about your child, then, you know you are not trying to massage your ego. I thank God I have a good product in the society. I am not trying to praise him overboard, but he knows his boundaries; so, I thank God for everything.

What is it like being a single parent?
It is not a child’s play at all. There was a time he lived with his dad because I have to fulfill all righteousness. He wanted him and we discussed it, so I allowed him to go. But circumstances still warranted me to be in the custody of the child now. So, raising him alone is a blessing to me. It has made me strong. Whatever decision I make, I make sure I put him into consideration. I thank God I am not lazy; at least, I have been able to feed him well, clothe him well and give him good education. It has not been easy, but being a single parent has made me
who I am today.

The singer however has told us to keep our calm on the matter saying he has not impregnated any woman, well, not at the moment.

In a post directed at multiple blogs who reported the news, the singer begs that his songs be promoted to help...