A 31-year-old man identified as Joshua Tabiti, has revealed that he has tried everything possible to stop stealing even if his life depended on it as he is addicted to it.

His parents too have tried their best and he cannot do without it… According to reports, He made this known to the operatives of the Zonal Intervention Squad, (ZIS) Onikan, Lagos State. He said that he had been stealing right from his childhood. Three other members of the gang, arrested along with him are Oluseye Arokoyo (34), Ahmed Alli (24) and Moses Ofoke (31), receiver of the stolen vehicles. Tabiti said; “I have done everything to stop stealing, but I couldn’t.

My parents also tried their best, but I cannot do away with robbery.

I was sacked where I worked as a driver after I stole my boss’ money.” The suspect and his gang members were said to have stolen about 26 Toyota Camry cars from Oworoshoki, Bariga and Somolu areas of Lagos metropolis. He said; “I’m a driver with two children.

I chose to remain single because of divorce - Actress Vicky Zugah

I started doing this job after I was sacked where I worked as a driver at Victoria Island. My friend introduced me to this job in 2017.

I have stolen 11 vehicles in Oworonshoki, Bariga and Somolu in Lagos. What we do is to go out around 2 a.m. A man cuts a master key for us to steal Toyota cars. We open the cars and kick-start the ignitions.

We don’t rob at gunpoint. We got the key for N1000 or N2000. After stealing, we send the cars to Ondo to two buyers. The first car we stole was a Nissan salon.

Peter Okoye Reveals What Can Bring P-Square Together Again

Peter Okoye in an exclusive chat with Vibe.ng, allegedly revealed the only way P-Square can get back together.
And it is if the “respect” that was initially in the team can be brought back.
Is there a slight possibility that some day, we will get back the P-Square we used to know?
Of course. When the respect is back. When you stay apart for a while, the respect will come. We’ve lost it.
People will never understand but we’ve lost that respect. Like I said in the open letter, we will work in future but when we come back,...
Click to Continue Reading
News

We reported here yesterday that Governor of Ekiti state, Ayo Fayose was said to have narrowly escaped death in Lagos as his official car, a G-Wagon, went up in flames along Oshodi road.
New details have emerged from his friend. See below
Former Minister of Aviation who is a friend to Fayose, Femi Fani-Kayode has alleged that it was a spiritual bomb that was thrown at the car..

Relationship blogger and psychologist, Joro Olumofin has enumerated 31 places where eligible bachelors can meet their "wife material" ladies this festive season.
See the full list below... 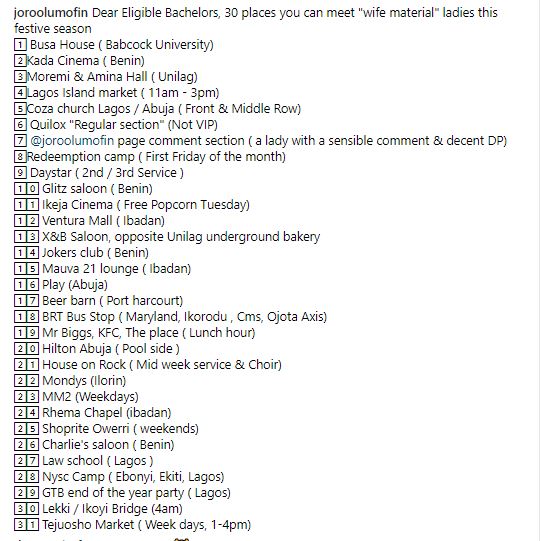