An orphaned girl has suffered  paranoia and urinary incontinence after being raped severally by her adoptive father. According to one Blessing Mccollumbus on Facebook, the girl lost her parents at 6!

Mitchell was Orphaned at d age of six. Her parent died in an accident.

She was a pupil in Top_form Educational Centre, when this tragedy
happened. D Proprietess.. Mrs Miracle Nwokocha, adopted her and gave her
Scholarship. So, she started living with this ,cursed family, from age
six.
When she clocked Ten, d man, whom she calls father, started
asking her to suck his Penis, and he will pour in ,his sperm in her
mouth,…DAT, it’s daddy’s holy Milk. And he forces her to drink his
sperm up to 3 times a day. D girl kept getting fattened.
He will
finger her, rape her, or do as he wishes with her. His threats are
always,…DAT he picked her from nothing, DAT she has no one to speak
for her, DAT if she wants to stay alive, she should cooperate. The
girl’s Bros, are feeding from hands to mouth, so, his threats were
right.
This man took her to a river, and killed a Cockerel on her
head. Telling her that if she tells anyone DAT he lays her, she will
die within 7 days. This girl was brainwashed into helplessness.
D
rape continued. Sometimes, d wife of d rapist, will find her crying in d
backyard, cos of pains from sex, she will retort…you are a stubborn
child. What does it take from u, if u obey daddy?
D girl had nothing for herself, but their dosages of constant rape.
She was more or less, d family’s sex slave.

D rapist’s wife, has no child of her own. I believe that she was
culpable cos, she thought DAT d hubby might give her a child from d
girl. While I told her in d court today, DAT has she ever asked herself,
y she never for once, got pregnant, and this her sex slave, never got
pregnant too? She looked at me with hostility, and ran off.

Michelle never got pregnant in all this sex drive, she rather ,was
saddled with over matured, difficult, untreated infections, which I will
b treating gradually, till she is freed.
This man has no intentions to impregnate anybody, but to satisfy his deity.

He again travelled to Umahia with d girl by 2015, and bathed her in
their River, DAT he renewed what will kill her, if she discloses her
sexual relationship with him.
This girl was groomed with fear, threats….

I was looking at her in d court today…fat, and jittery. She is always
watching her back over nothing. Even when she sat with me in d court,
she will hold my hand so tight , and b squeezing it. I told her that she
was hurting me, she jerked back to her senses and said DAT she is
sorry. I now held her hands, she said no, and held me instead, DAT I
might disappoint her by not holding her well. Dat she prefers holding
me, cos her grip will not disappoint her. So, I allowed her to do my
hands and arms ,as she wished. Fear complex.
I will call
her…Michelle, she will jump, and run to me,instead of just answering
yes, and walk up to me. I discovered DAT she is no more mentally stable.
Her escape..

D man told her that even if she grows, and gets married, DAT he will
still b sleeping with her. That he will choose her husband for her. Dat
he will still b sleeping with her, and her hubby will have no say to
this. She escaped from them, this March 2017, after d wife helped in
pinning her down for her hubby to penetrate, after they damaged her laps
with hot knife. that was d last rape. She saw it DAT her death is nigh.

Michelle has uncontrollable urine, which passes thru her vagina. As she
walks, u will b hearing some sounds from her vagina. She itches now and
then, and she is always talking to herself. Michelle is still expecting
to die after unending 7 days she was threatened with. Dats y she is
always looking behind her. I asked her y her neck is always watching out
for something, she said DAT d man might still b out there to kill her.
The man travelled to ogoni, while d wife went to her School.. Her Bros
came. She disclosed it, and Ran with him. D Bros surfaced with a lawyer
on pro bono, and here, we are still on it….
Michelle’s Bros
can’t feed her, she was kept in a Pentecostal Church DAT gave her a
temporary accommodation.. Michelle, as I speak now, is homeless.
Am starting her treatment from next tomorrow, including counseling. DAT might alleviate her from her worries.

Michelle is not DAT mentally OK now. Always running, instead of
walking, always watching over her shoulders, always trying to squeeze on
something for moral,always talking to herself.
I could kill d man for her, but I will waste my life,and my kids will suffer.
They showed us DAT they have money in d court today.

I stood b4 d short devil of a man. Eye ball to eye ball…all he could
say was “good morning ma”… I liked d fear of Blessing I instilled in
him.
D wife started misbehaving in d court… Dressed like Mother
Theresa…was singing ..”Satan shame unto u,all powers belongs to
Jesus”
D court clerk called her to order, to shut up, DAT this is court.
She remained mute like a fool. D song was for me, for standing behind
Michelle. They thought DAT she will show up in d court with only d
Lawyer. A woman DAT breathes lies like Carbon Monoxide. D court was
adjourned. Will tell few, for security reasons, when. My greetings to Blessing Awulotu Felix, who damned d distance to come for Michelle..God bless u darling. My love goes to Awele Ideal, who is d real ideas, we are operating with…chukwu gozie GI nnem.

They played us..d rapist and his wife was found no where, when d court
sat. Which made d magistrate mad, and it was adjourned. Hahahahahahah. I
did something radical, music changed. Won’t give them d heads up,cos
they are reading too.
Paul, u and ur wife…enjoy my write up OK. I will see u in court again.
Look at d pics well. The smart ones will recognise d game am up to.
Michelle is back to d Church, am home now to get dinner done.
Thanks for all ur players.
#justiceformichelle
McColumbus’ Jotter© 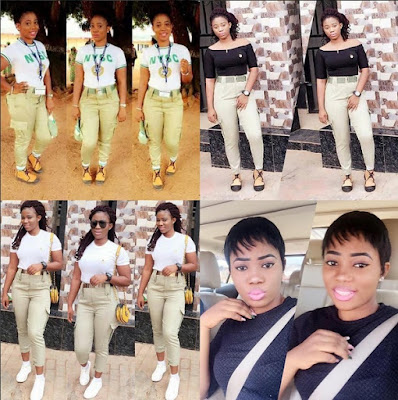 This is sad! The beautiful female corps member above, Jenyo Ojo, died in an auto crash while going to Anambra State for her monthly clearance which is today!

She is supposed to pass out next month! May her soul rest in perfect peace, Amen!