Sonorous voiced singer Ego Ogaro has come a long way in the
music industry. From the days of being a vocalist with Lagbaja to
setting up her own band, she has continued to woo fans with her sweet
voice.

The wedding party actress, Beverly Naya has revealed that as an only child, the problem she is facing is having no one to take pictures of her.

The British born Nigerian actress reportedly lives with her mother in Lagos! Her snaps below....

April 22, 2010 is a date many wouldn’t forget easily in the
Nigerian music industry. On that day, gifted rapper, Olaitan
Olatunbodun, aka Dagrin, breathed his last, days after he was involved
in a horrific car crash. Even though seven years have gone past, the
pain of his death is still raw and many still wonder what the Pon Pon
Pon singer would have accomplished if he hadn’t been cut short in his
prime.

However, Dagrin’s younger brother, Olatunbosun, aka Trod,
has appeared on the scene and he says he is here to continue what his
elder brother couldn’t finish. Trod sounds so much like Dagrin and their
flows are...

Monday Inspiration: I’m proud of what I do – Monica Tanee, smoked fish seller 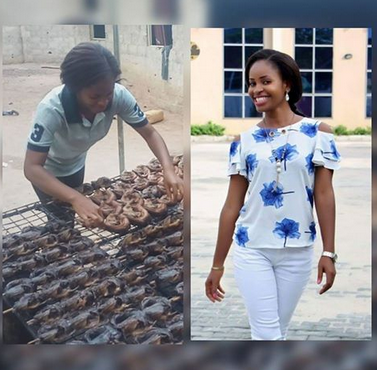 Monica Nwilubabari Tanee
is a graduate of Chemical Engineering from the University of
Portharcourt, She was all over the news last week when she posted a
picture of herself smoking cat fish on her Facebook page, a business she
started while serving in Ondo state not minding the stress, humiliation
and low patronage.


She almost gave up on the business after her service
year but later kicked it off with encouragement from
her business partner ;Yinyegha Tiki who owns the firewood oven she uses
in smoking fish. Monica’s biggest Inspiration is her late dad who
passed away last month, in her words: “My dad didn’t have any formal
education but he gave me my first degree,...