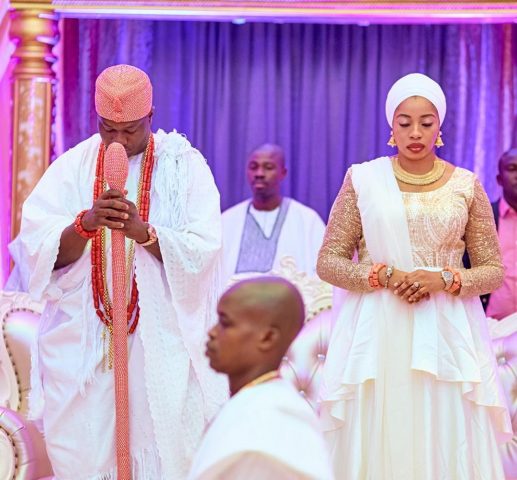 The handsome monarch of Ile-Ife, Oba Enitan Adeyeye Ogunwusi has
embarked on a 7-day seclusion exercise, which took off on Sunday,
September 24.

This is preceding the annual Olojo is the biggest festival in the culture calendar of the ancient city.
By secluding himself, the Ooni separates himself from the people to
cleanse his palace and himself of all the evil forces. After the
cleansing, he leads the people to Okemogun shrine and renews his vows as
a king.

However, the people of Ile-Ife are eagerly awaiting the influx of
foreigners into the town for this year’s Olojo Festival which is
expected to climax on Saturday.
Before he entered seclusion on Sunday, Oba Ogunwusi explained that Olojo
Festival was about the celebration of the creation of the first day by
God.
The Ooni is expected to come out after the seventh day and he would wear the Aare crown which he wears just once in a year.
Oba Ogunwusi said, “Our ancestors will be appeased during the period
and by the time I come out on Saturday for the grand finale, the
seclusion rites would have been be concluded.
It is a celebration of the creation of the universe and many visitors
from within the country and the Diaspora will come around to celebrate
with us. My duty is specifically to offer prayers and that I will do to
the best of my ability.
“This year’s Olojo Festival will witness an unprecedented participation
of foreigners; the members of the Black Caucus of the Pennsylvania House
of Representatives and about 150 other black Americans have already
indicated interest to participate in the festival.
Meanwhile, it is expected that the new Olori Bolanlle Ogunwusi would be
unveiled during this year’s festival since the former queen, Olori
Wuraola had left the palace and officially declared that she is no
longer the wife of the king.

“A king can never be without a queen. It’s unheard of in the history
of the Yorubas. As the cradle of Yorubaland, Ife stands out in culture
and tradition. As a custodian of our culture, the king would showcase
our culture to the world and we have many people coming from outside the
country. Already, there is a queen in the palace and preparations are
ongoing to unveil her to the people,” palace sources said.

The 2016 Olojo Festival was marked by the current Ooni, Oba Ogunwusi with former Olori Wuraola by his side.

READ
Buhari to address Nigerians in nationwide broadcast by 8 pm