Nigerian singer, BankyW shared this new portrait of his family via IG tonight.

The popular RnB singer, Bankole Wellington also known as Banky W, announced his engagement to Actress, Adesua Etomi, months ago and will be having their wedding this November.

You will recall that he secretly proposed to Adesua in February 2017.

He wrote back then: “In that time, I got engaged to you in my “made for you” music video… and by pure coincidence, we both got cast to get married in the wedding party movie… but all the while, we were the very best of friends. I guess, in our case, real life will now imitate art.

Adesua to take all BankyW's money for doing this

“I’m not sure what the future will bring, but I’m completely sure that I am ready to face it with you by my side. I pray that God continues to build me into the kind of man that you deserve. I love you Susu.. I feel safe and at peace with you. You mean the world to me. Thank you for agreeing to be my lover and best friend. Thank you for agreeing to be my wife.“PS: The timing of this may make some people think this is promo for another video, or a movie. It isn’t. “Ironically, everyone who has seen us together in art, or in life, always insists that we have amazing chemistry. I guess you can say we have been hiding in plain sight. “I fell in love with an Actress. Now my life is a movie.”

Coming after he and his Dj brutally blasted Akpororo and his wife for joking about his spending, rapper, Yung6ix has admitted that he misunderstood the joke!

Ying6ix has now admitted in an interview with HipTV that he reacted without seeing the video about the joke.

At first when everybody started....I didn't get to see the full joke.
But when I got to see it, I realized it was a joke. Its
all entertainment. So no feelings/emotions attached. I knew it was a
joke. We all made fun about it and all took advantage of the fact that I
was trending and I had a new video out there. I don't see anything
coming between me and him or whatever. He is... 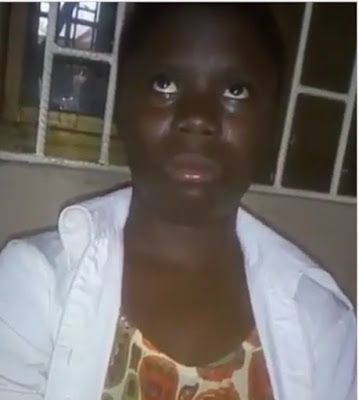 OMG! This is a shocking video of a housmaid from Cotonou named Felicia! In the video, Felicia confessed to using two rats to cook Jollof rice for her madam!

The video is in Yoruba language, Felicia is seen crying and confessing to killing the rats in the kitchen and using it to prepare the meal for her madam!
The madam further explained that, her son who went to the kitchen to get food for himself and his girlfriend saw the rats in the pot!
Hit play below...

OMG! What was she thinking?? Maybe she eats rat??? Oh dear!

They both confessed their love to one another after he made a love declaration to her on his Instagram page minutes ago.
Read comments from bottom to top below...