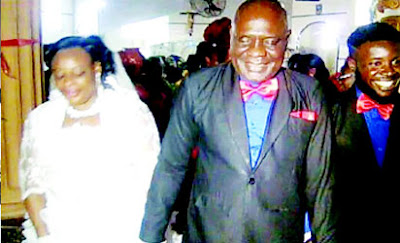 The story of Mr. Alphonsus Orjinta, a 59-year-old visually-impaired teacher and 1991 Political Science Education graduate of University of Nigeria Nsukka, UNN, who got married in Enugu after years of rejection and loneliness, is one that elicits emotion.

Speaking with Vanguard, Mr. Orjinta, who could not contain his joy, thanked God for the opportunity and privilege granted him after several unsuccessful attempts at getting married largely due to his blindness. Mr. Alphonsus Orjinta (middle), his bride and best man at the wedding. The couple had their first contact in 2016, which eventually culminated in a wedlock. Mr. Orjinta said: “I have made many failed attempts in the past to get a soul mate since many were not willing to settle with him because...