An artisan, Samarola Musa, has allegedly beaten his apprentice, Ademola
Adeshina, to death for his refusal to stop dating a lady in the Lugbe
area of Abuja.Musa, who is facing a homicide charge at a Federal Capital Territory
High Court, Gwagwalada, Abuja, is believed to have had a homosexual
relationship with the 24-year-old man.

It was learnt that an autopsy indicated that Ademola died as a result of the beating he received from Musa.
The report also showed that the furniture maker had sodomised his apprentice before his death in May 2017.
Musa,
42, in his statement to the police, said he slapped the deceased after
he caught him having sex with the lady, identified simply as Precious,
in his workshop, claiming that Ademola died of malaria a week after the
incident.
But Ademola’s father, Okuneye, faulted Musa’s claims,
stressing that the son died from the beatings he received from the
former bouncer, who he described as a huge man.
He told Punch
Metro that Musa had once informed him that Ademola was dating a lady he
did not approve of, adding that he warned the deceased to stop going out
with the lady.
The bereaved father said his son called him on May
3, two days before his death that he had malaria, adding that he
visited him at the workshop and found him working.

“About
48 hours after, I got a text message from Musa asking me to call him
back urgently. I did and he simply told me that my son had passed away; I
was shocked. He said he was at Asokoro General Hospital and when I got
there, I found my son lying in the back seat of his Honda Accord car
with his face against the glass window,” he said.

Okuneye
said the accused informed him that his son died of malaria and
suggested that the body should be buried, but he insisted on depositing
it in a morgue.
The engineer explained that after returning home,
he received a call from Precious, who narrated to him how Musa beat his
son to death.
He said,

“The girl said she
witnessed the assault and when she confronted Musa, he injured her in
the leg. I asked if she was ready to make a statement at the police
station about it and she agreed.
“Musa was arrested and he
admitted to beating my boy because he was dating the girl. We did a
post-mortem on the body and it showed that Ademola suffered serious
internal injury from the beating.
“The autopsy also showed that
the boy was sodomised; it was after this that we got to know that Musa
is a well known homosexual in Lugbe and its environs; he had been
sleeping with my son and he killed him because he was dating a woman.”

Puhnch
gathered that the family had made plans to bury the deceased last
Saturday, but the police declined to grant them the permission to carry
out the funeral.
The accused was remanded in Kuje prisons by the court on Monday, while the case was adjourned till November 20,2017. 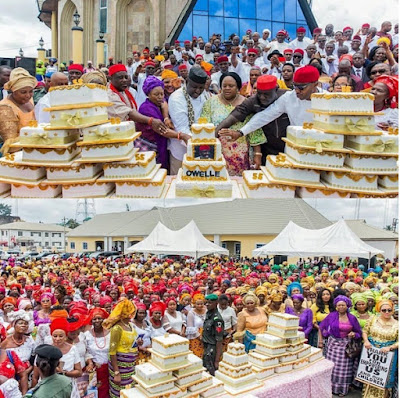 Gov. Rochas Okorocha will turn 55 in four days time —
September 22 — but the birthday cakes are flooding in already.
The
governor took to Twitter to announce a baptism of cake from women in all
the 27 local government areas of the the state.
“It’s
not yet my birthday, but the sound of celebration and drum rolls
begins, a show of love as women from 27 LGA with 27 cakes visits me
today,”


the governor tweeted, alongside pictures of the cake and the
women.
However, this has generated tension and sparked online controversy! Checkout some of the reactions below....

An Igbo lady, Chinkata Uche Tina, has recounted her ordeal in the hands of some police men in Abia state!

According to her, they almost killed her because she is Igbo! Sharing the photos, she wrote:

This was how i escaped death last night. I left ph to Enugu as early as
possible yesterday morning for something very important. And i left
Enugu to ph by 4pm hoping to be in aba by pass 6pm since there's curfew
in the state but unfortunately we got stocked at ama awusa just between
Enugu and Abia before Okigwe. We were there till 10pm, Army came to help
clear the road. On our way to aba, we passed so many check points
without no stress. Getting close to Ariaria we were been arrested
and beaten by police. They...

The beauty salon owner is now the owner of a posh Abula restaurant located in Lekki Lagos.

The
restaurant located at Omorinre Johnson street, off Busola Durosimi Etti
street. Lekki phase 1 will officially open to the public this coming
Sunday the 24th of September 2017.