Facebook user, Samuel Oj Temibi, who went viral days ago after he shared photos of himself cooking and threatening ti divorce his wife for refusing to cook has cried out that it was only a fun post as he is not a married man. 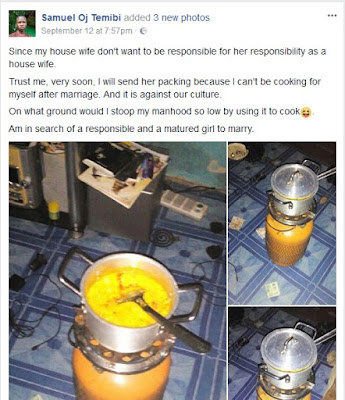 Samuel Oj Temibi revealed his plan to send his wife packing for
allegedly failing to live up to her responsibility and taking care of
him especially in the area of ‘stomach infrastructure’.
According to Kogi born man man
who lives in Akure, Ondo state capital, he can’t be cooking for himself
after marriage because it’s against his culture.
Speaking with Kemi Filani Blog, he said:


I
made the humorous post on my Facebook page which was meant to
catch fun with my Facebook friends, to
my utmost surprise, when I came in
on the following day, alas, the jocular
post has went viral on Nigeria popular
blogspots which has caused a serious
squabbles among intelligent and high
profile Nigerians.
I was terrified, petrified and utterly
mystified when I perused the story.
“This is a shame to Nigerian bloggers
as nobody ever made a consultation to
me before sharing my personal post to
any blogger.”
“It is unprofessional, unethical and a
total aberration to the law that guides
the society of journalism for sharing
someone’s post without his/her
consent”
“It is also a degradation of character
and a punishable offense as the
frivolous publication is a total
humiliation to my person”
“When has it become a sin for
someone to make a post under his/her Facebook page? Should this absurdities
continue, Nigeria as a nation may not
find it easy to grow”
“I was never a married man neither
have I ever thought of getting married
for whatsoever reasons”
“I am a bachelor young chap who is
enthusiastic in bachelor’s live”
I urge Nigerians and those who may
have read the post to quickly disregard
it as it is aimed at tarnishing my
image.
“This publication is aimed at tainting
my pure image and it could not be
unconnected with my incessant
agitation of good governance in kogi
state and Nigeria as a whole”
Those who are hiding under blogger to
perpetrate evil should repent as it will
soon be down on them.
Lastly, I Will never be dismayed,
deterred or be perturbed to carry out
my Facebook activities which is to
advocate for good governance,
accountability and transparency from
the government of the day. A six-year-old pupil, Mohau Mamaregane allegedly committed suicide at school in Seshego outside Polokwane, South Africa on Tuesday.
Mohau Mamaregane, a Grade 1 learner at Dorothy Langa
Primary School, was found hanging from a noose (Pictured) on a...
Click to Continue Reading

Six-year-old pupil commits suicide at school (photos, details)
I am ready for battle with the army, i am ready to die – IPOB member, Odum Eje Eje says
To Top