A self acclaimed professional mourner, Sylvester Ricardo Moss, has taken to Facebook to list his rates for mourning!

The Aeronautics graduate from the University of LOWA, revealed that he charges as high as $1000, depending on ones request.
He shared photos of himself crying and wrote:

Do you want to boost your funeral?
Hire me….the professional mourner to come and cry at the funeral.
Below are the “Summer Special” prices: 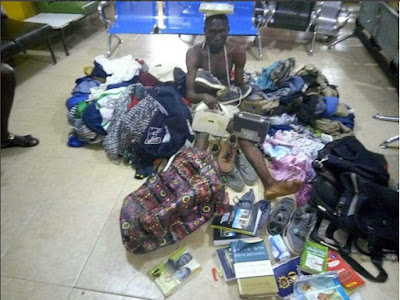 Most extra year students only think of how to clear their papers and graduate from the university but for the young man above, he was thinking of how to steal items from student's hostel!

The extra year student was paraded for allegedly stealing items which included: Text books, shoes, clothes, bread toaster, bags, radio etc from unsuspecting students at Awolowo Hall, Obafemi Awolowo University [OAU].
Some Nigerians asked if he wanted to open a boutique! LOL! But wait oh, does he want to open a super market???
Trust Nigerians to always mock! Checkout their reactions below... 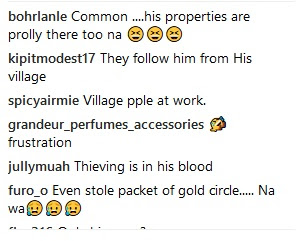 Lovely new photos of the girl with blue eyes in Keffi, Nasarawa state

Nigerian social media user posted photos of a little girl she had met at
the supermarket in Keffi, Nasarawa State, few weeks ago and it went viral!

Now, a Nigerian photographer, Emily Nkanga drove down to Keffi to meet the
girl who has been identified as Chinyere and took this beautiful photos of her
Sharing the photos on micro blogging platform, twitter, Emily wrote:

"A couple of weeks ago, @slimtmusic reached out to me and told me
about Chinyere and her pretty blue eyes. On Monday, I took a trip to
Keffi to see & take portraits of her. Chinyere is so cheerful,
smart, & she lives...

Governor Simon Lalong of Plateau State has confirmed the death of two
persons from the Thursday violence in Jos, the Plateau State capital.

Premium Times reported the violence, between Hausas and Igbos in a
part of Jos, which was caused by a disagreement on the appropriateness
or otherwise of the violence in Abia involving soldiers and members of a
pro-Biafra separatist group, IPOB.
On Friday, the governor who
had declared a dusk to dawn curfew in Jos, met with community and
religious leaders at the government house Jos.
Mr. Lalong
confirmed the deaths during the meeting and also acknowledged that some
persons were also injured and are hospitalised. He condoled with the
victims.
The governor charged all community and religious leaders to ensure peaceful coexistence in their respective places of authority.

“Community leaders must ensure peace in their...