Nigerian urban highlife singer, songwriter and graphic designer, Adekunle Kosoko, popularly known by his stage name Adekunle Gold, has given an epic reply to a fan who asked him for money.

The fan took to Twitter and asked him, ‘Guy howfar..you no dey dash person money?’.
And the singer had a savage reply. ‘Ma lo sise’ (Don’t go and Work) he said. 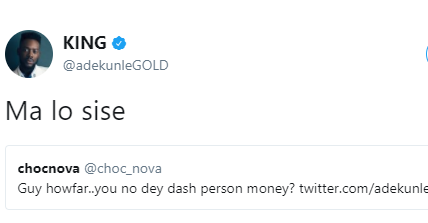 Recall hat the ‘Sade’ crooner took to his social media page sometime ago to share an amazing
testimony not known to many about his rise to stardom despite failing at
the auditioning stage of the MTN project fame twice.

He wrote: “7 & 8 years ago I auditioned for Mtn projects fame, I
nor enter. Today I was a Guest performer on the show. There’s a God in
heaven and He loves me! #Gold”

Adekunle explained that he was only signed to YBNL as a graphic
designer but after he released ‘ Sade’ he was officially signed as an
artist and has released his debut album ” Gold” with YBNL.

Simi reveals how making ‘Duduke’ made her feel