It was celebration time for the Esama of Benin Kingdom and members of his family in Benin-City when Chief Gabriel Igbinedion clocked 83 last Monday. Igbinedion took time off the celebration to talk about his life and some national issues.

I owe my life to God Almighty. I thank Him for keeping me alive. Secret of good health Long life is in your palm. The first thing is your stomach, that is, what you take through your mouth to your stomach. All of you, 30 years old, 40 years old, you know me. You have never heard or seen Igbinedion going to the bar to drink. I inculcated that habit in my children too. Drinking is good, even the doctor recommends that you take brandy or wine but not to the point of getting drunk. Everything in life is about moderation. Before you say anything out, think twice about it, especially the consequences. And long life is guaranteed if you have rest of mind. Do not do anything that will shoot your blood pressure up.

There are kids who suffer while growing up but I did not suffer. My father died when I was nine years old. I inherited a house in the village and six cocoa plantations. My mother was a big trader, selling fish. I will not say things were not rough but I survived. In this town, I sold kerosene for seven pence for more than three years when I was a houseboy and I went to fetch firewood from the bush five times a week. I remember one day when one of the sons of my boss, who was about eight years, defecated in the sitting room where I usually slept and the mother called on me to go and clean it up. All these were what God wanted me to pass through in life to be able to get to where I am now. I have been through a lot but God saw me through. Having seen it all in life, do you think Nigeria is going in the right direction?

“There is suffering in Nollywood” - Madam Saje

I do not want to delve into politics. Anyone before 1960 is a senior brother to Nigeria. In the 1940s, when we were under the British colonialists, I served in Ogbomosho as a police officer. I had my Opel Record car marked WEG 243; look at the car there, blue (pointing in the direction of the car in his premises).

I also served as orderly to (the late Chief Obafemi) Awolowo’s wife. I was deployed to Awolowo but his wife snatched me from him and I started driving her car. But if you travel outside, Nigeria has done well. Chief Gabriel Igbinedion Man is never satisfied. How I wish we have somebody (a leader) who does not ask for wealth or life, who wears Agbada. You know Agbada, that is the big dress on top of the inner wear. So if you wear Agbada, it is for the country, the one you wear inside is for the state. Your trousers, which are what you have left, are enough for you and your family to take care of yourselves. I thank God for Nigeria today, but I am praying that God will deliver the country by bringing a leader who has the fear of God.

How can we, since 1960, be looking for one thing, electricity, and we cannot get it? I will not like to delve into politics; if I have to talk about it, it is so deep. Virtually every Nigerian is talking about restructuring today. What is your own opinion on the issue? Restructuring is to amend what is wrong. My late daughter, Dora Akunyili, discussed this thing called restructuring in my sitting room in Abuja. When I was speaking, she bought into it. It is a very good idea. Restructuring Nigeria is long overdue. The constitution is also stale. We need changes. That is what the people are yearning for but whether the people are interpreting it wrongly I do not know. First of all, we have to condition the minds of Nigerians to love their country. If you see an America man, he will tell you ‘I am an American’.

He is proud and patriotic because the American system inculcated America into the Americans’ minds. If he is a British, he will proudly say ‘I am British’. Until Nigerians accept that they are Nigerians, all the things we are saying is waste of time. Our leaders have not sat down to pinpoint where the error is. I hope that one day we will see people who will truly demonstrate such great love and be proud of Nigeria.

We have lost so many great leaders like Bola Ige, Alfred Rewane among others who could have turned things around, it is a sad development. Life as a philanthropist and an entrepreneur The way God created me is that I do not like to see people suffer. I can even borrow for you if I know you genuinely need help. And I thank God that people have accepted me as one of the successful persons. And out of the several people that we started doing business together, I am still there today by the special grace of God.

When I was being given an honorary degree some time ago, a top politician said there is nobody that God does not speak to. It depends on if you are listening at the time God is speaking to you. I hear God’s voice, I win some, I lose some. I did not succeed in everything I did, but no one in this country has taken the risk I have taken to dig unknown grounds. When I was growing up, I worked in Leventis Motors. One particular Christmas, I was driving on Sapele Road when I saw a Greek entrepreneur who asked his security guard to mix red mud with water and start sprinkling it on the people there because they were scrambling to buy soft drinks from him for Christmas. I got annoyed. I went to him and told him ‘I will compete with you’.

The following January 3, I left the country to go and bring Canada Dry and I located it opposite his office. I do not like seeing people suffering. The government of the day is doing its best. I will not condemn any government. I pray that the Lord will answer our prayers. You were a police officer. People have always talked about the creation of state police. What is your take on that? I vehemently object to state police. Those of us who once saw state police in operation will not pray for it to come to this country again. D

o you know what it took us to uproot state police? Do you know how politicians used them to their advantage? Please write with your ten fingers against it. Some politicians think they are there today but do not know they will not be there tomorrow. Anyone that agitates for state police does not love this country. What native police did to this country in the 50s and 60s, if you saw it, you will not want them to come back.

You have achieved a lot. What else are you asking God for?

A journey of seven years! Yomi Casual reveals how he met and fell in love with his soon-to-be-bride, Grace

His name is Olorunyomi Omoniyi Makun, but that might not
strike an immediate chord.  Rather, his brand name, Yomi Casual, rings a
much louder bell than his birth name. And this is quite understandable.

After having spent about a decade in the fashion industry, Yomi Casual
has risen to become one of the popular and respected Nigerian designers
whose works have earned him accolades and huge patronage from the very
rich and distinguished stylish Naija men.

Yomi was in the news lately when he publicly proposed to his
very young and pretty fiancee, Grace Onuoha at an event held in Lagos
recently. His partner, who clearly had no...

Zainab Sodangi, a newly married bride, has reportedly died a week
and few days after exchanging marital vows with her hubby, Sondagi
Salim.

Zainab who got married in Abuja on Tuesday the 29th of August 2017
died 10 days later while entertaining some family members who came to
honour them at home.

According to family sources, Zainab who was full of life sat on a chair after playing with everyone.

She suddenly stopped breathing with her eyes wide opened.

The family source who broke the news said her death came as a surprise to everyone as she...

Olanike Disu’s burial: Photos of her orphans and guests at the ceremony 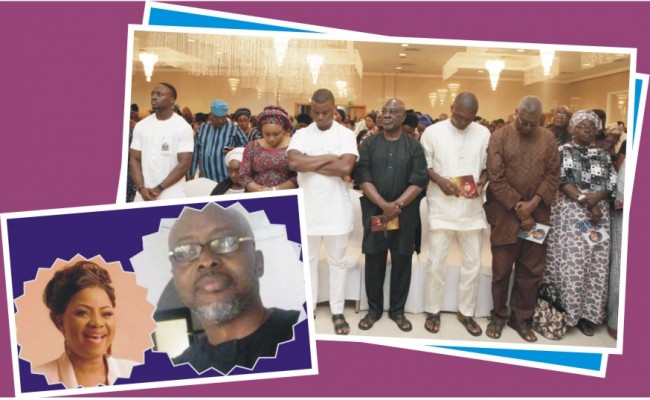 Omoyeni and Ayomide Disu, children of Abayomi and Olanike Disu,
remain strong as they mourn their parents who died 6 weeks apart.

At
the Sunday, September 10, Service of Songs at the Civic Centre (on
Ozumba Mbadiwe, Victoria Island, Lagos) in honour of their mother who
passed on on Monday, September 4, they put up brave faces.
Family, friends and colleagues of Tax Madam were on hand to provide shoulders to lean on.
With the deaths of their father on July 25 and
mother on September 4, the young adults begin a new phase full of
prayers. While Mr. Disu died at 56, his wife passed on at 54…
...
Click to Continue Reading