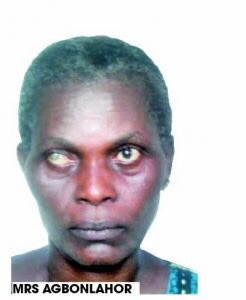 A woman has been left blind following an attack by unknown gunmen at her
residence in Edo State. The gunmen were said to have killed her husband
and only daughter raped.

According to the woman Elizabeth, the
men stormed their residence on No 5 Adesuwa Street in Benin in an Ash
coloured Toyota Camry car at about 9pm on the fateful day, while the
family was busy watching Television.

Some hard
rapping on the door, followed by banging and shouts of: “Where is
Agbonlahor?”, signalled trouble and generated fear in the members of
the family. But, paralyzed with fear, they could not open the door,
forcing the irate assailants break it down.

“Immediately they found their way into our sitting room, I tried to beg
them and to inquire why they were looking for my husband. They shouted
at me saying, ‘do you think that we are here to play?’ And they started
beating me. In the process, one of them used his gun to hit me on my
left eye,” recalled Mrs. Agbonlahor.

Her daughter, Prayer, tried to escape, but was caught and raped.
Her screams attracted her father from his room to rush to the scene. He
was shot on the chest and died on the spot, said the widow.

Mrs Agbonlahor said after shooting her husband, the gunmen fled, leaving her in severe trauma and panic.

I could not imagine seeing my husband killed in my presence, after
raping my daughter. I was also in great pains because of the injury on
my eye. However, I managed to report the matter to the police who
arrived at the scene and deposited his body at the mortuary, while my
daughter was taken to the hospital for treatment.”

“In fact, I am dumbfounded at the whole thing. Now, I have been made to
become a widow overnight, my daughter was assaulted, while I am
partially blind. What is my offence?”

Mrs Agbonlahor has now relocated to their village with her daughter for
fear of her husband’s killers returning to eliminate him.

Watch moment Nengi dodged Ozo’s kiss after he was evicted

Ozo has been evicted from Big Brother’s house

Finally, Trikytee has been evicted from Big Brother Naija