A heartbreaking end has just hit the young Kenyan couple, Ann Wambui and Wilson Mutura who became an internet sensation after photos from their simple wedding in January 2017 went viral.

The
famous Kenyan Sh100 wedding couple has had to sell their “supermarkets”
after failing to make enough profit to sustain their livelihood.
Wilson
Mutura, whose wife Ann is expectant with their first child, told
Nairobi News that he struggled with the shop for months before finally
selling it off.
He is now back on the road at Kasarani selling apples which was his initial job before the Sh100 wedding fame.
Mutura told Nairobi News:

“We
were making sales that were as little as Sh200 per day and at the end
of the month had to borrow money for rent and so we decided to sell it
off and buy enough fruits’ stock,”

The
couple’s sponsor, Bonfire Adventures, who stocked their shop, had
promised to pay three months’ rent as well as mentor the couple.
When Nairobi News asked if they consulted their mentor before closing shop, Mutura said:

“Our mentor was always busy. He never shared any business tips so in the end we had to make a decision on our own.”

Bonfire Adventures, through its marketing manager, however, refuted the claims stating:

“We
have been with them all though even during the recent baby shower we
were with them. Let me find out exactly what happened and get back to
you.”

Nairobi
News adds that Mutura also claimed news that they had a baby shower was
false as they are yet to hold any event ahead of the baby’s arrival.
The
couple has however been getting free premarital clinics from a private
hospital Komarock Modern Healthcare that offered a free maternity
package.

Imade who recently got her papers is finally able to travel to the
United states to be with daddy whenever daddy wants her there.
Surprisingly,
Imade did not make the trip in the company of a nanny, an aunt or a
cousin but in the company of her mother, Davido’s beloved Sophia Momodu.

A video of Davido carrying his daughter into his home and inducting
her into the 30 billion gang is already in circulation but Sophia was no
where in the clip.
We can’t say if Davido and Sophia would be having a happy reunion in the
cozy home or Sophie would be transported to the nearest cozy hotel.

This development is also funny considering the fact that Davido’s
other baby mama Amanda is...

The confirmation around 9:49 am shocked all as the troubled marriage was the subject of rumours for over two weeks.
The
confession of the Benin princess has elevated the drama to the realms
of firsts. Not in the history of the ancient town celebrated as the
cradle of mankind has this much scandal rocked the powerful throne.

Here
are 4 ways this confirmation by the estranged wife of the powerful King
turned the scandal to a record breaking episode as compiled by
encomium.ng:

1. The King married a divorcee.
As the news of the marriage filtered in, it was established that...
Click to Continue Reading
News 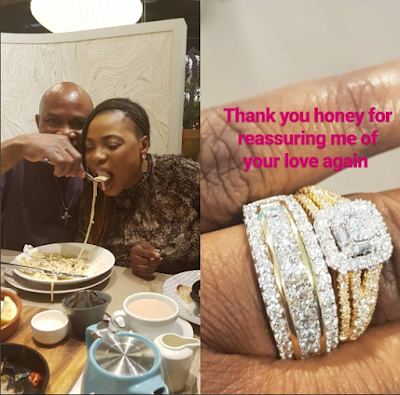 A London based Nigerian prophetess,Olabiwonninu Olubori took to her
Instagram page to assure Nigerian youths good marriages still exist and
they shouldn't be deterred by negative stories on social media.

Posting a
photo of the new ring her husband bought her after 21 years in
marriage,she wrote

I'm doing this to let people believe that there is still joy in marriage
because, I read on social media that our youth are scared of marriage
this days as if marriage is all doom, gloom,violence and sorrow. Most
people wants their Children to get married eventually but our Children
are...